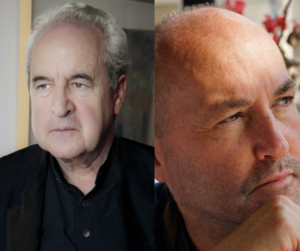 In conversation with Colum McCann

“The heir to Nabokov” (The Sunday Telegraph), Irish novelist John Banville won the Man Booker Prize for The Sea, a story of loss and the fickle nature of memory. His many other novels include The Book of Evidence, Mrs. Osmond, The Untouchable, and April in Spain. He has earned the James Tait Black Memorial Prize, the Irish PEN Award, the Franz Kafka Prize, and the Prince of Asturias Award, Spain’s most prestigious literary honor. A fellow of the Royal Society of Literature, Banville is also an acclaimed playwright, nonfiction writer, screenwriter, and crime novelist. In The Singularities, a mysterious man with a borrowed name returns to the estate of his youth to find it occupied by the descendants of a famous but controversial scientist.

Colum McCann won the 2009 National Book Award for Let the Great World Spin. His other novels include Song Dogs, This Side of Brightness, and the Man Booker Prize-shortlisted TransAtlantic . His most recent novel, Apeirogon, was a New York Times bestseller and won the Prix Montluc, the Elle Prize, and the Jewish National Book Award.The Thomas Hunter Writer in Residence at Hunter College in New York and the co-founder of the non-profit global story exchange organization Narrative 4, McCann has written for The New Yorker, Esquire, and the Paris Review, among other publications.