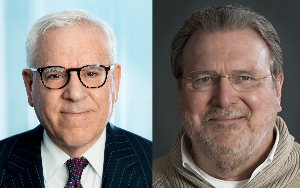 David M. Rubenstein | How to Invest: Masters on the Craft

In conversation with Richard Vague

David Rubenstein is the co-founder and co-chairman of The Carlyle Group, one of the world’s most successful private equity firms. The host of The David Rubinstein Show and Bloomberg Wealth with David Rubenstein on Bloomberg TV, he is the author of the New York Times bestsellers The American Story, How to Lead, and The American Experiment. He is chairman of the boards of the John F. Kennedy Center for the Performing Arts, the Council on Foreign Relations, and the National Gallery of Art, and as a leader in patriotic philanthropy, he has provided long-term loans of his rare copies of the Magna Carta, the Declaration of Independence, the Emancipation Proclamation, and other historical documents to the U.S. Government. Utilizing his own three decades’ experience and conversations with some of the biggest names in finance, his new book is a master class in investing.

Venture capitalist and longtime Philadelphia-area philanthropist Richard Vague serves on the Penn Medicine board, is Chairman of the University of Pennsylvania Press, and is the president of the Philadelphia Live Arts and Fringe Festival. He is the author of The Next Economic Disaster: Why It’s Coming and How to Avoid It and A Brief History of Doom: Two Hundred Years of Financial Crises.