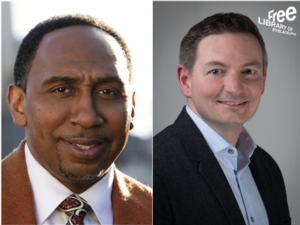 Stephen A. Smith | Straight Shooter: A Memoir of Second Chances and First Takes

In conversation with Mike Sielski

The star of ESPN’s No. 1 morning talk show First Take, Stephen A. Smith is one of the U.S. sporting press’s most popular and outspoken personalities. He is also the host of NBA in Stephen A’s World on ESPN2 and ESPN+, the host and producer of the podcast K[no]w Mercy with Stephen A. Smith, and an NBA analyst on ABC’s NBA Countdown and ESPN’s Sportscenter. From his upbringing as the youngest son in an immigrant family in Queens, NY to the successes and challenges in his professional career, Smith is characteristically candid in Straight Shooter and offers hot takes on sports, politics, and his personal life.

A sports columnist at The Philadelphia Inquirer since 2013, Mike Sielski is the author of The Rise, an account of Kobe Bryant’s life and impact as a sports and cultural figure. He is also the author of Fading Echoes: A True Story of Rivalry and Brotherhood from the Football Field to the Fields of Honor and is the co-author of How to Be Like Jackie Robinson: Life Lessons from Baseball’s Greatest Hero. In 2015 he was voted the best sports columnist in the U.S. by the Associated Press Sports Editors.