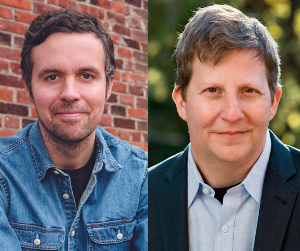 John Hendrickson | Life on Delay: Making Peace with a Stutter

In conversation with Robert Kolker

John Hendrickson is the author of a 2019 Atlantic article titled “What Joe Biden Can’t Bring Himself to Say.” An account of the President’s—and his own—lifelong experience with stuttering, it was read by more than two million people, including multitudes of stutterers who responded with stories of their own journeys. Life on Delay is a memoir born from that article and the deeper questions it raised for Hendrickson, as well as an exploration of the wider personal, societal, and professional issues that can affect stutterers and their families. A senior editor at The Atlantic, he wrote and edited for Rolling Stone, Esquire, and The Denver Post, and has spoken about stuttering, politics, and journalism on a variety of media platforms and at universities across the United States.

Robert Kolker’s Hidden Valley Road, the nonfiction account of a family’s experience with schizophrenia, was an instant No. 1 New York Times bestseller, an Oprah’s Book Club selection, and was named a best book of the year by scores of media outlets. He is also the author of Lost Girls, one of Slate’s best nonfiction books of the quarter century. A National Magazine Award finalist, his articles have appeared in Wired, The New York Times Magazine, and Bloomberg Businessweek, among many other periodicals.