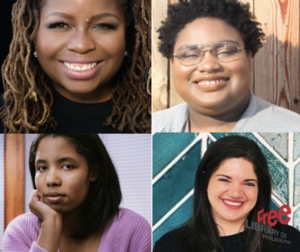 VIRTUAL - Veronica Chambers | Finish the Fight!: The Brave and Revolutionary Women Who Fought for the Right to Vote

Veronica Chambers is the editor for Narrative Projects at The New York Times and a co-author of "Finish the Fight!" She joined The Times in 2018 as the lead editor of the Past Tense project, which told stories using photographs unearthed from the paper's archives. Born in Panama and raised in Brooklyn, her other works include the critically acclaimed memoir "Mama's Girl," the anthology "Queen Bey: A Celebration of the Power and Creativity of Beyoncé Knowles-Carter," and the new children's book "Shirley Chisholm Is a Verb."

Jennifer Harlan is a member of the Special Projects team at The New York Times and a co-author of "Finish the Fight!" As a reporter on the Past Tense project, she wrote about all sorts of overlooked histories, from private eyes to roller derby, with a focus on women's history. She also writes for The Times about books, board games, the opioid crisis and the coronavirus pandemic. She is from Louisville, Kentucky, but currently calls Brooklyn home.

Rachelle Baker is a multi-disciplinary artist from Detroit, MI. In addition to "Finish the Fight!", her illustrations have been published in several books including "Making Our Way Home: The Great Migration and the Black American Dream" by Blair Imani, "Shirley Chisholm is a Verb" by Veronica Chambers, and the forthcoming "Motherlode: 100+ Women Who Made Hip-Hop,” by Clover Hope, which comes out in February 2021.

Steffi Walthall is a Virginia-based illustrator, a sometimes comic artist and all times storyteller that celebrates diversity in all forms. She loves working on character-centric stories whether they are fictional or historical. In addition to "Finish the Fight!" her work includes "The Field Guide To The North American Teenager" by Ben Philippe, "50 Fearless Women Who Made American History" by Jenifer Bazzit, and "The Story Of: Martin Luther King Jr" by Christine Platt.