Head over to Parkway Central Library on Friday, June 2, at 2 p.m. for a special screening of Percy Jackson & the Olympians: The Lightning Thief in the Montgomery Auditorium.

The film, based on the book of the same name by Rick Riordan, chronicles the adventures of Percy Jackson, who has not only discovered he is the son of the Greek god Poseidon, but has also found that the beings of Greek mythology are alive and well. Riordan’s popular Percy Jackson series is composed of five novels, all of which are available to borrow from the Free Library of Philadelphia. So if you love The Lightning Thief, be sure to check out the other books in the series!

Percy Jackson & the Olympians:The Lightning Thief will be shown at Free Library branches throughout the summer, so check back for the schedule and updates. 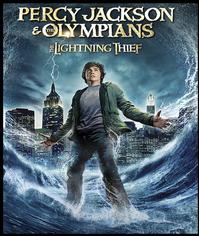 Percy Jackson & the Olympians
1 Comment | Add a Comment
Sorry my bad English. I`m from Ukraine. Nice Post. I'm still waiting for CKEditor on the iPad, is it fixed yet? Thanks for all you do with the editor, and for proactively spreading the word on supporting those in need. With respect xxdevil.
xxdevil - Ukrain