Beware! Lions, Tigers and Bears in the Rare Book Department

Beware!  Lions, tigers and bears have been found in the Rare Book Department at the Free Library of Philadelphia.  Before making this discovery several weeks ago I wouldn’t have believed it either, but there really are lions, tigers, and bears in the Borneman Pennsylvania German Manuscript Collection.  I’ve only really met one lion so far, but I predict I’ll soon be meeting tigers and bears as well.  The lion who greeted me was wearing a crown; holding an upraised sword in his right paw; and a sheaf of arrows in his left.  None too friendly mind you! However, he was looking to his left, and safely enclosed in a shield, surmounted with a fleur-de-lis crown. He had lost part of his face, and tail, which made me none too happy because it’s always important to see a lion’s face.  I asked myself how long he had been living in the Borneman Manuscript 1, Hymnal of the Pietists of the Wissahickon, where I had found him.  This king of the beasts wasn’t about to tell me, and I totally understood because you see, he was in two pieces.  The bookbinder must have cut him in two before binding the blank leaves of paper into a narrow format.  While paging through the manuscript I also found a lily on a shield, surmounted by a fleur-de-lis crown.  The lily I had rather expected because someone had noted in pencil on the front pastedown (the leaf of an endpaper that is pasted to the inside of the front or back cover of a book) that one might find one.  No one, however, had ever said anything about a lion!  Both the lion and the lily are watermarks, and there are, indeed, lions, tigers, bears, other animals, flowers, and symbols used by papermakers as watermarks.

So, what is a watermark?  A watermark is a figure or design impressed in paper as it is being made.  Take one of your bank checks and hold it to the light:  You should be able to see a “security” watermark , which guarantees the check’s authenticity. Paper manufactured today, as in the 18th and 19th century, bears a watermark, which is unique to the producer of that paper.  It is his/her trademark.

Most paper made prior to circa 1817 is marked with finely and evenly spaced sieve-like line impressions left by the thin strands of brass wire that were fixed horizontally to a rigid rectangular wooden frame a bit larger than the intended paper size, and with vertical chain line impressions that were left in the paper by the slightly thicker brass wires laid at about one inch intervals across, and perpendicular to the finer horizontal wires.  Paper handmade on these types of moulds is known as laid paper, and is easily distinguished from wove paper, which, when held to the light will appear uniformly translucent, exhibiting no pattern whatsoever. Although there were wove paper moulds in use as early as about 1788, this type of paper did not begin to replace laid paper until after ca. 1817.

In the 18th and 19th century, watermarks were formed by hand from fine wire, and then sewn—also with fine wire—to the upper surface of the laid paper mould’s wire sieve. Most early American watermarks were simple in design, such as initials or a name on one half of the mould and a symbol or device, i.e. the countermark, on the other half.  Individual characteristics are always evident in both the design and execution, as well as in their positions relative to the chain and laid lines.  Paper and its watermarks are an integral part of a manuscript or book, and a vital tool in document identification. They help establish approximate dates for undated manuscripts. Often there are no dates given at all for a particular manuscript, or there are a whole lot of different dates, and names appended to excerpts with notations identifying the original author and when he wrote the piece, but no mention of the scrivener and when he copied the piece into that particular manuscript. In those instances where several people have made different entries over a period of time, the watermark is instrumental in setting time and geographical parameters.

Records show that many American mills were in business for only relatively short periods of time, so a date before which and after which a watermark would have been less likely in use can be determined with relative certainty. However, because a mill may have held the paper for further seasoning (further aging of paper), or a printer may have delayed using the paper he had intended for immediate use, the interval between the production of a sheet of paper and its use is not so easily ascertained. Interestingly enough, research does indicate that approximately 94% of all paper featuring a date in the watermark was used within six years of the watermark date.

So far we’ve been able to look at about 20 manuscripts from the Borneman Pennsylvania German Manuscript collection, and have found 16 watermarks of which four have their countermarks.  Of those, we have five digital images obtained by using a backlit scan to capture the image. The cooperation of conservators such as Jim Hinz, Rebecca Smyrl, Mary Broadway, and Keith Jameson at the Conservation Center for Art & Historic Artifacts  (CCAHA) has made it possible to do the backlit scans when the manuscripts are disbound for conservation.

A few examples will show you how these watermark images are helping us determine when and where the manuscripts were created.

Borneman Ms. 1, The Hymnal of the Pietists of the Wissahickon, is a commonplace book containing select copies of religious works, hymns, descriptions of religious ecstatic experiences, and poetry.  We do not know who the scrivener was or when he created the work.  However, we do know that the copy he made of Madame Guyon’s Short and Easie Method of Prayer  was an English translation "done out of French, and printed in the year 1704" (excerpted from title page of work).  We also know from a note to hymn #188 Der einsamen Turtel=Tauben…that it was sung by Johann Gottfried Selig (1668-1745) on July 24, 1709.  Selig was one of the leaders of the Johannes Kelpius Community along the Wissahickon.

Thomas’s Gravell’s American Watermarks 1690-1835 (New Castle, Delaware: Oak Knoll Press, 2002), has an example from 1709 (Fig. 619, 134) of our fleur-de-lis watermark, which belongs to Wintherthur Museum in Wilmington, Delaware.  Per Jeanne Solensky, librarian for the Joseph Downs Collection of Manuscripts and Printed Ephemera at Winterthur Museum, this 1709 document (55.759) is part of their Legal Documents collection, Collection 268.  The record refers to a suit brought by Joseph Growden of Philadelphia for damages sustained (not specified), and is on paper made by the Rittenhouse Papermill, the oldest papermill in America (1690).

William Algernon Churchill was an avid collector of watermarks, and includes in his important work Watermarks in Paper in Holland, England, France, etc. in the XVII and XVIII Centuries and Their Interconnection (Amsterdam: M. Hertzberger, 1935; repr. 1967, 1985, and 1990) an illustration of our lion from his collection.  It was found on paper used in 1707 by the Republic of the Seven United Provinces, a republic in Europe existing from 1581-1795.  It is the watermark of the famous French papermaker Jean Villedary (1668-1758).  Should we be concerned that we’ve found a European papermaker’s watermark?  Prior to the American Revolution almost all paper was imported from Europe, so it’s not unusual to find European watermarks on paper used in the colonies predating 1775.  Both watermarks help us place the date of the Borneman Ms. 1 to ca. 1709, and the Rittenhouse watermark suggests that it had to have been written on this side of the Atlantic.

Borneman Ms. 98, Charles F. Egelmann's Commonplace Book of Formulas Along with Notes on Sundry Mechanical and Scientific Topics is undated. A watermark PB in outline in the center of one of the Ms. pages identifies the papermaker Peter Bechtel, a native of Germany, who owned and operated mills in Germantown, PA, and who is known to have ordered moulds watermarked PB on an annual basis from 1798 until 1820 from Nathan Sellers, America’s first large-scale maker of paper moulds.  Our PB watermark matches a PB watermark in a document dated 1806 from the Delaware Historical Society Collection (Thomas Gravell’s American Watermarks (Fig. 749, 163).  This information helps us estimate that Egelmann started writing the manuscript in America ca.1806.  Without the watermark, we would have no way to approximate the date of Borneman Ms. 98.

It is important to record paper and watermark information when cataloguing a book or manuscript: Both are essential tools in determining the age of a document, and are an integral and added dimension to the work.  Dr. Keith Arbour, noted author, and bibliographer has this to say on page xv of his Foreword to Thomas Gravell’s American Watermarks : “It is now up to bibliographers and institutional cataloguers of early American imprints to act on the widespread—and widely ignored—recognition that records for books under their scrutiny are unacceptably inadequate unless they include paper and watermark descriptions.”

We have begun to record the watermarks we’re finding in the Borneman Pennsylvania German Manuscript collection.  Their digitization and availability online will provide a global audience unlimited instantaneous access to a resource, valuable not only to us, but also to the public-at-large.  Please be sure to visit our Facebook gallery for more watermark digital images. 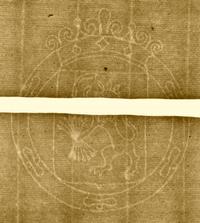 National Endowment for the Humanities
1 Comment | Add a Comment
To see how to research watermarks (even in a pasted down item) please see WISK at Http://www.earlybook.info
Ian Christie-Miller - UK