If I’m Happy, Then I Must Sing, Part One

Three Moravian Manuscripts in the Pennsylvania German Collection at FLP

The Pennsylvania German Collection at the Free Library of Philadelphia contains a  wealth of valuable research materials available to scholars and the general public.  Among these are three Moravian manuscripts:

Thanks to a 2011 grant from the prestigious National Endowment for the Humanities  Save America’s Treasures program, all three Moravian manuscripts have been conserved by the Conservation Center for Art & Historic Artifacts in Philadelphia, and the Clavier und Singstücke für Charlotte Sabine Schropp, January 1799 will soon be available online as a fully digitized FLP e-book.

Reading Theodor Schulz’s diary, or looking at the music copybooks of Charlotte Sabine Schropp and Sarah Horsfield  is a very personal journey.  Stepping back into time in Part One of If I’m Happy, Then I Must Sing we shall first explore the background common to all Moravians. In Part Two we shall make the acquaintance of Theodor Schulz, and join him as he confides to his diary his interests and observations during a four month stay in Pennsylvania from August to December, 1799.  In Part Three we shall meet Charlotte Sabine Schropp, and shall learn more about her family and music copybook begun in January 1799. In Part Four we shall be introduced to Sarah Horsfield and her family, and see from examples in her music copybook started on July 14, 1803 how musical culture and life were changing both in Europe and America at the turn of the nineteenth century.  In the process we shall also get a glimpse of the Moravian society in which these three individuals lived;  learn how they contributed their talents and skills; and what political and religious  thoughts molded their spirits and minds.  N.B.  All transcriptions of the German script and translations are mine.

Background Common to All Moravians

Moravian culture in the eighteenth and nineteenth centuries was designed to be part of an international uniform whole.  Moravian settlements and mission outposts were found everywhere across the globe.  No matter in what part of the world, everyone was following the same worship schedule, using the same liturgical materials, and living according to the same set order and communal organization.  The result was that there were no political or geographical boundaries for a Moravian.  He was a citizen of the world, and that world was Moravian no matter where he found himself.

Count Nicolaus Ludwig von Zinzendorf, German religious and social reformer and bishop of the Moravian Church, so conceived the Moravian mundane life that every portion of it was in some way associated with God, and music was at its core.  It was part of the church services, especially the Singstunde  (Hour of Song) which was an occasion to worship exclusively in song.  Hymns taught and comforted, and were all pervasive.  One sang them at every occasion, and from memory, and the melodies learned were categorized by association. For example, when the trombone ensemble played from the bell tower, one knew by the melodies if a death were being announced, and to which choir house the deceased had belonged.  There were the love feasts1, and the individual choir house festivals2 where music played a prominent part.  Sacred and secular music were performed both with and without instruments for worship, as well as  for one’s own enjoyment.  The first performances in America of works by European classical composers such as Franz Josef Haydn, Carl Phillip Emmanuel Bach, as well as others, often occurred in Moravian performances at Bethlehem, Pennsylvania.  Life in a Moravian community offered certain benefits, and most definitely one of the most important was the musical life of the community.

1A Lovefeast  is a  service dedicated to Christian love, and is most famously practiced by the Moravians. Traditionally a sweetened bun and coffee is served to the congregation in the pews by a Diener or server. A Lovefeast seeks to strengthen the bonds and the spirit of harmony, goodwill, and congeniality, as well as to forgive past disputes and instead love one another.  Music was an important part of the Lovefeast.

2Choir house festival ~ Moravians lived in the 18th and 19th century by the choir system, where members with similar life experiences (age, gender, marital status) worshipped together, and lived together such as the single brothers, single sisters, married couples, widowed men and women, etc.  Most choir houses celebrated their own special festival in which music played a prominent part. 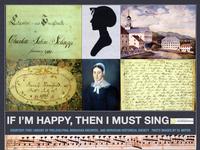 If I'm Happy, Then I Must Sing 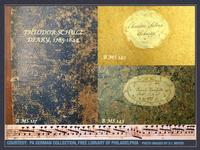 National Endowment for the Humanities
4 Comments | Add a Comment
Awesome stuff here, I love learning more about or great state. Thanks, Jenny
Jenny - Philadelphia
Jenny, Thanks so much for reading part one of "If I'm Happy, Then I Must Sing." I love learning, too. When you have a chance, take a look at parts two, three, and four...let me know what you think. Del M.
del moyer - Philadelphia
i agree with the statement if we're happy, just express it.. God give us a voice, that's a gift.
Ladies fur coats - Indonesia
You're quite right. God gives us the voice, and it is a gift. Like all gifts, the Moravians, and many other pietistic groups used this great gift of music to praise God. It was the core of their community life. May we all keep on singing!
Del Moyer - Philadelphia