If I’m Happy, Then I Must Sing, Part Three

Charlotte Sabine Schropp (1787-1833) was the second daughter of Johannes Schropp (1750-1805), and Maria Elisabeth (1753-1801) née Tannenberg, and was born November 23, 1787, in Nazareth, Pennsylvania.  She came from a very well known musical family.  Her grandfather David Tannenberg (1728-1804) was not only the premier organ builder of his day, but also played the organ, the violin, and sang.  Liesel, as her mother was known to the family, was also musical, and as a child “…especially enjoyed singing, mainly at Eastertide.” In 1787 Charlotte’s father Johannes was the business manager of Nazareth and three years later moved to Bethlehem to perform the same duties.  There were four girls in the family, and all enjoyed a very close relationship with their parents. Therefore, it was heartbreaking when Liesel became terminally ill in 1801.  During this final illness Charlotte concentrated on her catechetical studies with Bishop George Henry Loskiel (1740-1814).  The Loskiels had no children, and after her father died in 1805, asked Charlotte to come and live with them.  She became like a daughter to them.  Charlotte became a teacher in the Moravian Female Seminary where she had also studied, but discontinued her duties there to care of the Loskiels.  Also, after her sister Maria Louisa died in 1819, she took her six-year-old niece Sophia Louisa to raise like a daughter.  Charlotte died June 21, 1833 at age 45.

There are forty-eight pieces in Charlotte Sabine’s Clavier und Singstücke.  Nine are keyboard pieces.   Only two of these are titled:  “The Twins of Latona” (CSS5) and “Federal March” (CSS22).  Another keyboard number (CSS14) has a note at the top:  “Lesson II.” This appears to be an exercise in octaves for the left hand. Of the thirty-nine vocal works, twenty-seven are in German, and twelve in English.  The themes are: worship; Holy Spirit; Christ’s wounds; death; God in nature; children’s Lieder; [songs of] thanksgiving; Christmas; New Year; secular.

The writer of Charlotte Sabine’s Memoir mentions that it was regrettable that she hadn’t left any written evidence of her personal experience with Christ.  This isn’t the case, for even in 1799 at age twelve, she was already collecting musical pieces, which reflected upon such things. There are twenty-eight hymns in Charlotte Sabine’s Clavier und Singstücke, such as Henrietta Luise von Hayn’s hymn Weil ich Jesu Schäflein bin (I’m Jesus’ Little Lamb) (CSS40), which expresses Moravian sentiments.

Using Psalm 23 as a model, von Hayn created the charming and childlike Weil ich Jesu Schäflein bin for one of the Moravian sisters, who was a dear friend.  Today, it is frequently used in children’s services. The melody is in the Brethren Choral Book, 1784 (Brüder Choral-Buch, 1784).  She wrote about forty hymns, which are to be found in the Brethren Hymnal, 1778 (Brüder Gesangbuch,1778), and which reflect her fervent love of Christ. In my translation, it reads:

I am Jesus’ little lamb, And I never tire of my Shepherd dear, as He leads me far and near.  He who loves me, He who ever knows me by my name.  As I frolic to and fro, guided by Him, this I know, sweetest grass and water pure, He will give me ever sure. Happy little lamb am I, loved by Him who lives on high. And when all is at an end, He will call me, as my friend, And will carry me upon his breast to my home of final rest, Amen, yes, I’m truly blessed.

Charlotte Sabine’s mother Liesel, as she lay dying, comforted others and herself by selecting and singing hymns.  Johannes Schropp wrote in her Memoir  that on 14 August 1801 “…around 1:00 in the morning she requested that we sing, and started the verse herself:  ‘I’ll fix upon his wounds, and love as much as I can, and in the spirit shall focus upon them without ceasing…Again, “…on 17 August in the evening around ten o’clock she was heard singing with an unusually bright voice: ‘Your torture, fear, and pain, O Lord Jesus console me.’ ”

The hymns in Charlotte Sabine’s Clavier und Singstücke as well as her mother Liesel’s use of hymns in her final days aptly illustrate why Moravians wrote hymns, and still do:

•  to express their own vision of God and their relationship to Him.

•  to increase the choice and number of pieces available for congregational use.

•  to teach their beliefs

It was part of a Moravian child’s education to be thoroughly schooled in vocal music.  Charlotte Sabine may have collected so many hymns because memorizing hymn tunes and chorales was a daily event, and part of the spiritual learning process.  She came from a musical family, and as we have seen, both her grandfather and mother were known to love to sing. For instance, on May 4, 1793 David Tannenberg was so moved by the consecration of his organ during a communion service at the Graceham, Maryland Moravian Church that he spontaneously stood up and sang a few appropriate verses from the gallery, much to the surprise and delight of the congregation.   Obviously the adult Schropps and Tannebergs had a repertoire of memorized hymns, which they could call upon for all occasions.

Although hymns predominate in Charlotte Sabine’s “Clavier und Singstücke,” the collection is made up of both sacred and secular music.  We find an aria from Sir George Collier’s opera “Selima and Azor” (1776); German, and British Isles folk songs; several English pieces to poems by Dr. Joseph Addison; songs of thanksgiving; and children’s songs.  The diversity of music and the notation “Lesson II” on the keyboard piece CSS14 support that this number, as well as others, were school instructional material. 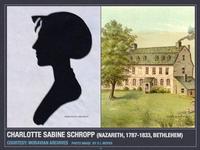 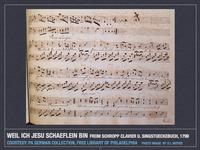