Read (and Listen) Between The Lines: A Halloween Playlist from Free Library's Spotify Channel

Welcome back once again to the Free Library of Frightadelphia's bloodcurdling blog!

It would seem that you have survived previous playlists and have come back for more maddening music for your aural amusement?

Well boils and ghouls, this year we've concocted a cross section of lurid literature from our chilling collections and their influence on music of the macabre.

This tangled web of insidious inspiration includes some obvious scary selections, such as Robert W. Chambers' The King in Yellow, which spurred The Dead Milkmen to write a song and album of the same name; Ray Bradbury's Something Wicked This Way Comes, putridly paired up with British psychobilly band The Meteors; The Sonics' "Psycho" scream rivals the fiend featured in Robert Bloch's novel; The Alarm's terrifying tome tribute to Stephen King's The Stand; or Isaac Asimov's I, Robot, who punk rock pioneers U.K. Subs sing about in rawkous recognition.

Gothic horrors such as Mary Shelley's Frankenstein, Edgar Allan Poe's The Cask of Amontillado, Washington Irving's The Legend of Sleepy Hollow, Robert Louis Stevenson's The Strange Case of Dr. Jekyll and Mr. Hyde, and H.G. Well's War of The Worlds and The Invisible Man have all directly influenced beastly bands and monstrous musicians with names like New York Dolls, Young Werewolves, The Invisible Men, Monotones, Lillingtons, and even The Alan Parsons Project, who wrote and performed an entire tribute album to Edgar Allan Poe!

Others selections in this eerily eclectic mix of literary lyrics may not be as glaringly evident. Take Nick Cave and The Bad Seeds' "Red Right Hand", which along with its foreboding lyrics and overall dark vibe, references John Milton's epic poem Paradise Lost. "Narcissist" by The Libertines is based on Oscar Wilde's The Picture of Dorian Gray. Heavy Metal mainstays Metallica put down their booze once in a while to bury their noses in books and came out with the headbanging anthem "The Thing That Should Not Be", based on H. P. Lovecraft's The Call of Cthulhu. Perhaps the most devilish song presented here is Rolling Stones' "Sympathy for the Devil", which is said to be Mick Jagger taking on the persona of "The Devil" featured in the Russian novel The Master and The Margarita. But the song and book both in a crazy category all their own is the Michael Jackson tune about a boy and his friendship with a murderous rat, "Ben", based on the novel Willard (a.k.a. Ratman's Notebooks) by Stephen Gilbert.

No matter where your dark desires take you this Mischief Night, make sure to read between the lines and you'll be sure to have a spooky soundtrack filled with vampires, witches, zombies, ghosts, graveyards, haunted houses, nightmares, and the supernatural!

Don't forget to follow the Free Library of Philadelphia Spotify channel to check out putrid playlists from the past and be notified of future mad mixes. 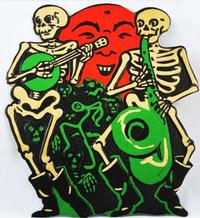 The King In Yellow - Literature by Robert W. Chambers, Music by The Dead Milkmen

The Alan Parsons Project - Tales of Mystery and Imagination Edgar Allan Poe album insert, 1976
1 Comment | Add a Comment
A very good list! Metallica also has a song called "The Call of K'tulhu," but it's not nearly as good as "The Thing That Should Not Be."
Alex Grey - Philadelphia