"I refused to cover my head in public. Refused to walk through the world as a messenger of Allah’s teachings, ate hot dogs and bacon when I was with my girls. My Muslim beliefs lived just left of my heart. I was leaving space for something more promising. Let her be who she’s trying to become, my father said. Yeah, I said. Let me be myself" (Woodson p. 97).

Thus begins Chapter 9 of Jacqueline Woodson’s Another Brooklyn. In the previous chapter, we learn of August’s father’s conversion to the Nation of Islam. While August embraces her father’s new religion at home, she also lets it remain there. When walking out onto the streets of Brooklyn, August tucks religion away.

I grew up in a Muslim family–albeit, not an incredibly strict or religious one. Religion was present, but not all-encompassing. Still, there were certain expectations to uphold­—especially regarding how a young girl should act—and certain rules to be followed. I did not grow up eating pork. Alcohol wasn’t really kept in the house­; my mother has never even touched a drop. My mother would fast during Ramadan and pray as often as she could.

Some wrap themselves with religion for solace and healing. When Sister Loretta enters August’s life, she brings with her the promise of hope, and an opportunity to heal. As August and her family "[live] inside [their] backstories" filled with trauma, "Sister Loretta, dressed like a wingless Flying Nun, [swoops] down to save [them]" (p. 93). Sister Loretta becomes a maternal figure for the children, taking the place of the absent mother they desperately miss.

August "[kneels] toward Mecca and [prays] silently for [her] mother" (p. 96); she prays for the ability to understand the unknown and complex aspects of life—sexuality, death, her missing parent. As a young child, I’d pray for things I didn’t fully comprehend as well. I’d also pray for the protection of loved ones.

When something was wrong, I’d pray for things to turn out well, full of hope that my wishes would be answered.

And like August, sometimes I asked for the impossible, unable to accept the reality of certain situations.

As I grew older, I didn’t pray as often, basically stopping altogether. I found myself disagreeing with certain foundational principles, or the way that religion could be warped to justify terrible actions. Or, I just tired of certain rules that didn’t feel fair, or important, to me.

When reading about August’s journey, I was reminded of my own. August’s hesitancy to dive completely into Islam mirrored my own reluctance. Still, we both leaned on it sometimes in secret—when nothing else seemed to magically fix our problems, August and I turned to the promises of religion.

Like August, I eventually abandoned the belief that religion could prevent death, pain, or loss. Still, I understand how individuals gain a sense of solace, dependability, and a connection that can help during difficult, or wonderful, moments in life. I understand that religion empowers some—individuals like my mother, or August’s father and brother.

But maybe, August and I used religion to grab at hope—even for a brief moment of time. And maybe it was too difficult for us to dive into something that did not always meet the expectations that clung to our hopes—at least the most painful, desperate ones like resurrecting the dead. We were unable to handle the disappointment we sometimes met in those circumstances. So, we would turn away at what sometimes seemed too often like hopeless illusion and face reality with cynical eyes.

Yet, despite our disappointment, we remain hopeful. Neither of us can help falling back into hope, one way or another. 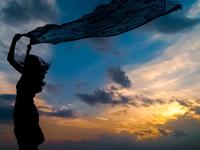 For this week's #OneBookWednesday, we discuss Spiritual and Religious Identity.
Add a Comment