While riding on the El one afternoon, as the train wobbily drifted into 46th Street Station, I noticed a handful of people standing around in a vacant lot off to the side of the tracks and then I actually gasped when I realized that the people were statues. They appear to depict people from the 1940s or 1950s, either just standing around or reading/sunbathing. A quick Google search yielded only one article about the statues and the comments at the very bottom provide a few theories as to what the statues are and why they are there. One person suggests that "an art museum of sorts" is in the works, and three people believe that the statues were created by artist J. Seward Johnson. One commenter references another New York Times article about the artist.

Ever since the appearance of the statues, I've been excited, curious, and honestly a little nervous because I just recently watched a very strange and satirical film about snooty art people called Velvet Buzzsaw and I kind of suspect that I will be turned into a statue if I continue researching the subject! But now I really can't forget the statues because, while working on a project at the Parkway Central Library, I stumbled upon a clue: a newspaper clipping about J. Seward Johnson! Apparently he's fairly well known for these lifelike statues, and nine of his creations lived at the Four Seasons Hotel at Logan Square for about a month in 1984. The crazy thing is that I was not actively looking for articles about Mr. Johnson at the time; the finding just happened to come up during my regular volunteer work in the Parkway Central Library’s Art Department, where I have been systematically going through the archival research files and creating a list of their contents.

The archival research files are a series of drawers in the Art Department which can be accessed by request at the reference desk. They are completely stuffed with folders containing a vast assemblage of newspaper clippings, pamphlets, booklets, postcards, and other ephemera that I sometimes have trouble classifying, some dating as far back as the mid 1800s. I am currently working on the Philadelphia series which consists of materials that are related to art within the city, and my eventual goal is to develop an online finding aid for the entire collection so that internet users will be able to search a comprehensive list and find something that relates to their interests (or weird local discoveries).

When I mentioned the statues and the newspaper discovery to librarian Alina Josan, she was eager to inform me that an entire folder dedicated to J. Seward Johnson probably exists in the Artists section of the research files. A quick shuffling through the drawers revealed that she was correct! I found a few other interesting newspaper clippings on the artist that provided me with his history, the critical backlash sometimes associated with his work, and yet another connection to my own life. Apparently one of Johnson’s more well-known statues resides at Hofstra University and I remember seeing it there when I attended the school for a brief semester before realizing that I pretty much hated New York. This was a pivotal point in my life, as I then decided to attend West Chester University which eventually motivated me to move to my current and much beloved home of Philadelphia... where I eventually found the statues while riding the El!

These connections that I’ve made between my life and some random statues are probably just coincidental and perhaps overly dramatized, but the discovery reminded me that there are countless things in my own neighborhood that I could be missing, and a local public library is often loaded with materials that just cannot be found on the internet. I probably could have found the same information and more about J. Seward Johnson by Googling his name, but I was much more excited to dig up original documents from a drawer. I think there is something to be said for this type of real-life treasure hunting. Thanks to the library, I was able to accidentally stumble upon something that validates a number of important decisions from my past. Plus, it’s just darn cool to look at original documents that have survived for decades despite the commonly held notion that paper is going out of style.

The first newspaper clipping I randomly found about the artist.
Some other interesting articles. 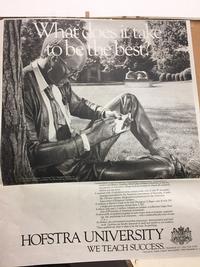 J. Seward Johnson's famous statue at Hofstra University
3 Comments | Add a Comment
I was very proud reading this. There is another connection I will tell you about
Bob G - Nj
Brianna; Cool blog post about the magical serendipities that are ever-present in our lives when we are fully present. Your Dad, who has been in my life since we were both in Kindergarten, turned me onto your blog, probably thinking of me because I have my own blog called Reflections From The Bell Curve, which just celebrated the beginning of its ninth year - 1800 posts; I'll have the hang of it soon! Anyway, keep writing and creating - I'll be sure to re-visit you again.
Pat - NJ
Briana, I was astounded at the sculptures in Soring Lake, NJ. After reading your blog, I looked to see who the sculptor is...and yup, it is him!. This makes me want to go back to the Grounds For Sculpture.
Caryl - NY