Uncovering the Real James Bond in the Rare Book Department

From Sean Connery to Daniel Craig, the intrepid agent of the British Secret Intelligence Service—James Bond, designated Agent 007—has epitomized masculine cool. Everyone knows how he likes his vodka martinis. Everyone knows about his favorite car and his love for the ladies... but did you know that the real James Bond was born in Philadelphia, and lived in this area until his death in 1989?

On Friday, October 8 at 2:00 p.m., you can join Jim Wright in a virtual event as he shares rarely seen items from the Free Library's Bond Collection. This virtual event coincides with the release of No Time To Die, the latest film in the James Bond saga.

Registration is free, but required »

I had the privilege of meeting the real James Bond in the 1970s when I was a very young temp worker at the Philadelphia Academy of Natural Sciences, now The Academy of Natural Sciences of Drexel University. It was at an Academy event hosted by the Audobon Society, where an elderly man in a wheelchair, pushed by a nurse, entered the room and caused quite a stir. Someone leaned over to me and said, "That's the real James Bond. Do you want to meet him?" Of course, I said, "Yes."

Born on January 4, 1900, the real James Bond was an ornithologist (an expert on birds). He was the longtime curator of the bird collection at the Philadelphia Academy of Natural Sciences. His area of expertise was birds native to the Caribbean Islands. Ian Fleming, the former secret agent who wrote the James Bond novels on which the enduring popular films are based, had a home in Jamaica. He was an avid bird-watcher and amateur ornithologist. It was this love of Caribbean birds that brought the real James Bond to the attention of Ian Fleming.

Fleming was preparing to write the first James Bond novel, Casino Royale (published in 1953). He needed a blunt, ethnic-neutral, macho name for his main character. Fleming had a  cherished copy of Birds of the West Indies by ornithologist, James Bond. That's it, Fleming thought—the main character's name is James Bond. Fleming used James Bond’s name without permission and the rest is not only history, but the beginning of a tenous friendship between Ian Fleming and the real James Bond, both of whom were real characters. 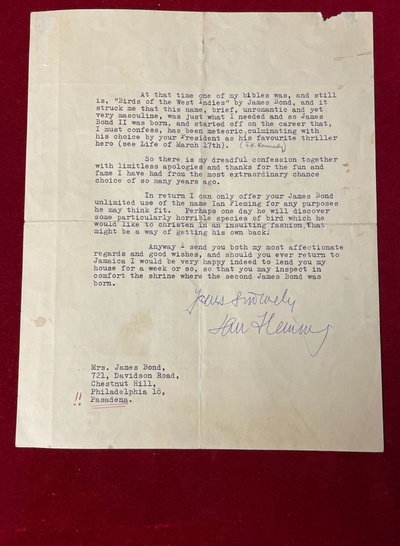 To appreciate the origins of the fictional James Bond, it is necessary to understand his creator—Ian Fleming. Fleming was born in London, in 1908. His Scottish father, Valentine, was killed in WWI, leaving Fleming's mother Evelyn to raise four boys alone. In a letter to his mother when he was a very young boy away at boarding school, Fleming wrote, "I am afraid I do not like school very much." He did go on to study at Eton College during his teenage years, where he wrote and published his first short story. At Eton, he excelled as an athlete but struggled academically.

To avoid expulsion due to his love of partying, girls, and fast cars (sound familiar?), Evelyn Fleming struck a deal with the headmaster: her son would leave Eton early so that he could enroll in Sandhurst Military College. Ian Fleming's rebellious nature was at odds with military life, and after one year he left Sandhurst. At a loss as to what to do with the black sheep of the family, Ian's mother decided the Villa Tennerhof school in Austria would be a good place for him to work on his foreign language skills while he was waiting to take the exam for service in the British Foreign Office. 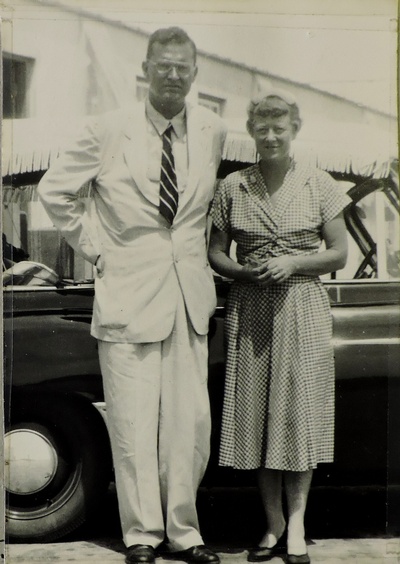 Photo of Jim and Mary

The year was 1927, and Tennerhof proved to be a good fit for Ian Fleming because it was there his writing skills were honed and encouraged. He went on to study German at Munich University and French at the Geneva University in Switzerland. Fleming had always had an abundance of female companions, but while studying abroad he developed a reputation as a womanizer. A friend at Tennerhof said Fleming was, "irresistible to the ladies". This may be one reason why he did not do well on the exams for the Foreign Office.

Undaunted, Fleming decided to pursue a career as a journalist and got a job with the news agency Reuters. Journalism taught Fleming how to write clean, tight prose, a style that contributed to the success of his Bond novels. In 1933, Reuters sent Ian Fleming on assignment to Moscow to cover the espionage trial of six British engineers. The British Foreign Office contacted him during this time asking Fleming to report back to them on his opinions about Stalin's Soviet Union.

In 1939, the Foreign Office asked Fleming to return to Russia as a journalist, but it was merely a cover for work as a spy, gathering intel on the Russian military. That same year, Ian Fleming was appointed a Lieutenant in the Royal Navy Reserves, where he worked as an Intelligence Officer, the same rank and job as his fictional character, James Bond. 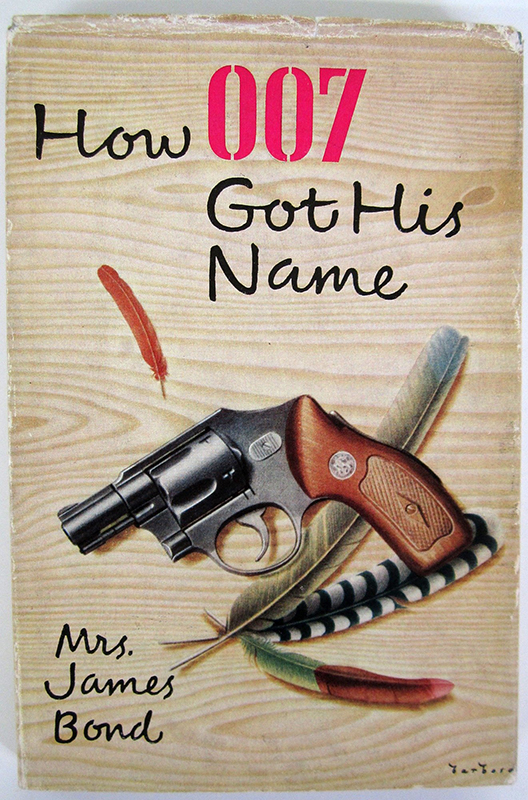 How 007 Got His Name by Bond by Mary Wickham Bond

The real James Bond was eight years older than Ian Fleming, and like Fleming, suffered the loss of a parent. The real James Bond lost his mother Margaret around the same time Fleming lost his father. Her death prompted Francis Edward Bond to move to England in 1914, with his teenage son. While in England, Bond attended the Harrow School, which like Eton where Fleming went to school, remains one of Britain's full-time, all-boys, upper-class boarding schools. While Fleming was struggling at Sandhurst, Bond was excelling at Cambridge, where he graduated in 1922 from Trinity College. Like Fleming, Bond grappled to find his true path and drifted into the financial world, working as a banker. Similarly, Fleming worked unsuccessfully as a stockbroker. Bored with banking, Bond went on to pursue his love of natural history, working as an unpaid curator at the Academy of Natural Sciences. He had no formal training in the sciences, yet went from gifted amateur to expert through laser-like dedication and tenacity.

In 1925, he made his first expedition into the lower Amazon. Bond went on to explore the jungles of the Bahamas and the Caribbean (over 100 islands in all). He authored around 50 scientific papers and wrote at least five books on the subject of birds. His writing output surpassed Ian Fleming's thirteen 007 novels, but few authors, of any genre, have achieved the popularity and financial success of Fleming's James Bond series, which has sold over 100 million copies worldwide. The James Bond film franchise is also one of the most successful franchises in film history. Daniel Craig is the sixth actor to portray James Bond since 1962. No Time to Die, which was scheduled for an April 2021 release has been pushed back to October 8 because of the continuing pandemic. It will be the last James Bond film for Craig and the 25th film in the series, which will no doubt continue.

The seemingly endless fascination with all things Bond, especially the relationship between the fictional James Bond and the real-life James Bond, is oddly enough a six degrees of separation situation—leading to the Parkway Central Library and the Rare Book Department's Special Collections. This is totally down to the shameless self-promotion of herself, and her husband, by author and Philadelphia blue-blood—Mary Wickham Bond. Her relentless efforts lead to the Bonds dropping in on Ian Fleming, unannounced, at his Jamaican retreat known as Goldeneye, so that Mary could engineer a meeting between her husband, the real James Bond, and Ian Fleming.

Mary Fanning Wickham Bond died at age 99 in 1997. She married James Bond, her second husband, in 1954. After the Ian Fleming novels and the success of the subsequent James Bond films, she would receive prank phone calls from strange women in the wee hours of the night, asking to speak with her husband, confusing him with his fictional namesake. In 1980, at the age of 82, her book To James Bond with Love was published. The impact the fictional James Bond had on the life of the real James Bond are chronicled in Jim Wright's new book, The Real James Bond.

Author, birding columnist, and nature photographer Jim Wright gathered some of the research for his book from the Bond Collection, housed within the Rare Book Department at Parkway Central Library. The collection includes David Contosta's manuscript for his biography, The Private Life of James Bond, Mary Wickham Bond's taped interview with the BBC  about the real and fictional Bonds, scrapbooks filled with clippings about her books and 007, and the books on her life with the real James Bond, as well as his relationship with Ian Fleming, among other writings and memorabilia. 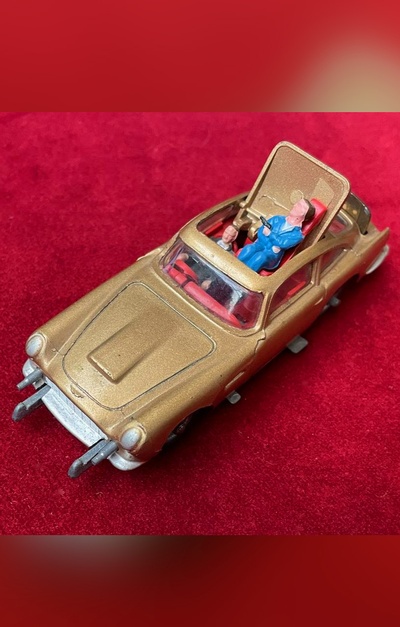 An Aston Martin with ejector seat, from the library's Bond archives 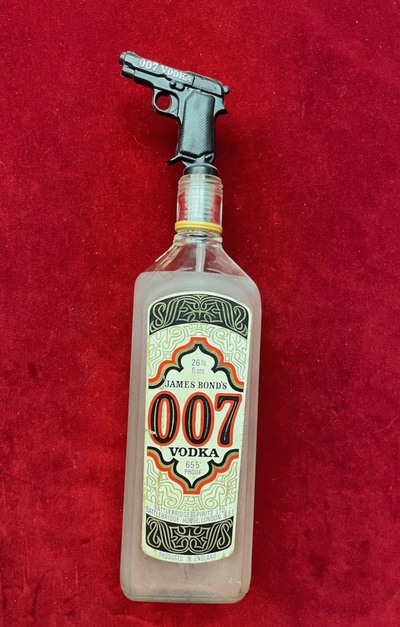 Please contact Joe Shemtov at shemtovj @ freelibrary.org if you have any questions concerning this program.

Author and conservationist, Jim Wright's new book on Bond was researched at the Parkway Central Library's Rare Books Department.
The real James Bond on the left with Ian Fleming at Fleming's Goldeneye estate in Jamaica.
The real James Bond at work.
3 Comments | Add a Comment
I love, love this truth, because I am a James Bond enthusiast. My first husband even bought a Walter PPK firearm! Not to mention I grew up with Mharlyn Merritt!
Karen Browne-Smith - Philadelphia
Fascinating story! I had no idea. Like many teenage boys in the '60s, James Bond was a hero of mine. While I outgrew my attraction to the character, I know now that I share an interest with the real James Bond, bird watching. Interesting turn of events, I must say.
Earl Hershey - Atlanta, GA
Enjoyed this Blog entry tremendously! Thank you so much!
Susan Ben - Philadelphia