Digital Comics and Graphic Novel Series for Tweens on Hoopla

If you’re like me, you already love Hoopla for streaming movies, music, and audiobooks. But did you know that Hoopla also has a great selection of comics and graphic novels?

I particularly love the range of graphic novels available for middle-grade readers. Tweens at home will love that their favorite series are only a few clicks away. And for readers who haven’t yet delved into the wide world of graphic novels, there’s something for everyone! Here are several newer titles and oldies-but-goodies I recommend: 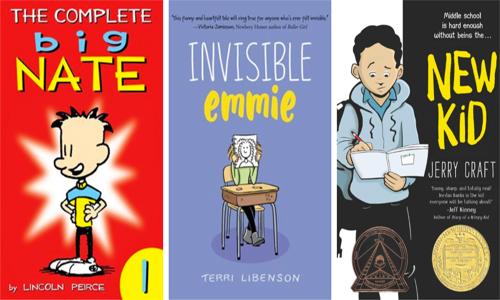 Missing the trials and tribulations of Middle-School? Laugh along with Big Nate, Lincoln Peirce’s series about the misadventures of sixth-grader Nate Wright and friends. Or try Invisible Emmie, the first book in Terri Libenson’s Emmie & Friends series, which features shy, artistic Emmie and outgoing, athletic Katie. This year’s Newbery and Coretta Scott King Author Award winner New Kid by Jerry Craft is also available. Get to know Jordan Banks as he transitions to a new private school where he is one of only a few African-American students. Craft has Jordan, a talented artist, tell his story of facing racism, fitting in, and making friends through his detailed sketchbook.

Friendship to the Max! 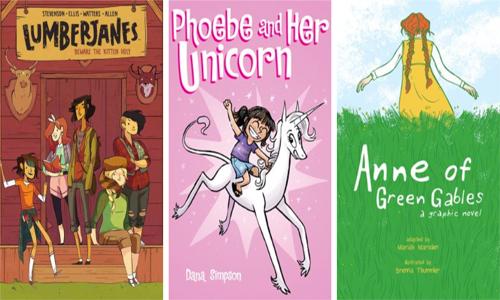 One of my favorite graphic novel series is Lumberjanes created by Shannon Watters, Grace Ellis, Noelle Stevenson, and Brooke Allen. Each volume follows the campers at Miss Qiunzella Thiskwin Penniquiqul Thistle Crumpet's Camp for Hardcore Lady Types as they earn merit badges while dealing with supernatural creatures. Phoebe and Her Unicorn by Dana Simpson may remind young readers’ parents of Calvin and Hobbes. Phoebe faces all aspects of fourth-grade life along with Marigold Heavenly Nostrils, a unicorn who grants Phoebe one wish and has to become her best friend. The timeless Anne of Green Gables by L. M. Montgomery is also available as a graphic novel. Mariah Marsden’s adaptation and Brenna Thummler’s lush illustrations bring the classic tale of spirited Anne to life in a whole new way. 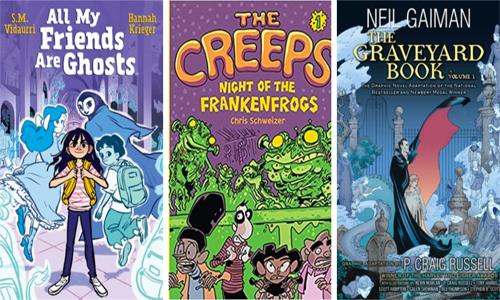 All My Friends Are Ghosts by S. M. Vidaurri stars Effie, who’s having a rough time at school. When she decides to skip and hides out in the woods, she meets three young ghosts who introduce her to their special school. The Creeps by Chris Schweizer is a hilarious series that follows four misfits as they solve spooky mysteries and deal with the crazy creatures that always seem to befall their town in Pumpkins County. I absolutely love Neil Gaiman’s Newbery-winning The Graveyard Book. It is definitely on the scarier side and the graphic novel is too. There’s murder, mystery, and lots of ghosts to meet! 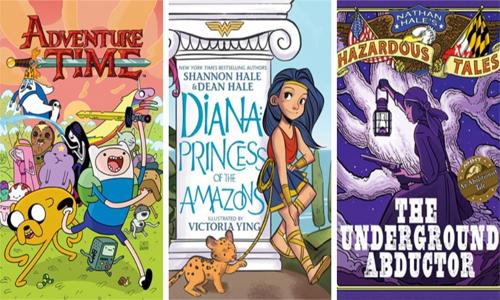 If you already love the television series, Adventure Time, don’t miss the comics and graphic novels! They’re super fun and filled with the humor and adventures of Jake the Dog and Finn the Human. Diana: Princess of the Amazons by Shannon and Dean Hale is a great introduction to the DC Comics Universe for younger readers. In this graphic novel, Diana is still and tween and trying to find her place on the island of Themyscira. As the only child on the island, life can be lonely, and Diana doesn’t yet have the powers of Wonder Woman. Try Nathan Hale’s Hazardous Tales for true rough-and-tumble stories from history that will leave you amazed. The series includes the stories of Harriet Tubman and the Underground Railroad, the Donner Party expedition, the Marquis de Lafayette, and more.

Let me know what graphic novels you're reading in the comments below!

Cover for Free Comic Book Day issue of Bad Machinery by John Allison
1 Comment | Add a Comment
I want to read The Okay Witch, but do not know how. If anyone knows please tell in the comments. PLEEEEASE!!!!!!!!!
bgfb gfrfbn - New Jersy