One of the joys of my profession is not knowing who will spark my curiosity to continue learning about something or someone. To celebrate Black History Month this year, I let my curiosity guide me to inventors and scientists either born in or who made Philadelphia their home. My search led me to learn a little about Dr. Rebecca Cole.

Rebecca Cole was born on March 16, 1846 in Philadelphia, the second of five children. Her family stressed the importance of education. Rebecca attended the Institute for Colored Youth in Philadelphia (today Cheyney University).  She would receive a ten-dollar award for academic excellence, conduct, and attendance.

During the height of the Civil War, Cole attended the Female Medical College of Pennsylvania, graduating in 1867. Dr. Rebecca Cole would become the second African American female after Rebecca Lee Crumpler to earn a medical degree and the first to do so in Philadelphia.

Dr. Cole’s first job was in New York City working under Dr. Elizabeth Blackwell as part of the recently created Tenement House Service. Her job as a "sanitary visitor" was to educate people living in New York City’s lower socioeconomic neighborhoods on the importance of good hygiene as a defense against illness. There has been scholarly debate over the validity of this program,  as it regards African Americans being provided true solutions to health conditions as opposed to rhetoric, in addition to the necessity of having a doctor make these visits. However, the social medicine aspect of this job appealed to Dr. Cole’s medical philosophy and she remained on the job a few years.

After leaving New York City, Dr. Cole had a brief stint in South Carolina before moving to Washington, D.C. and becoming the superintendent of the Home for Destitute Colored Women and Children. This organization committed to providing housing and medical care to African American women and children.

Upon returning to Philadelphia, along with fellow physician Dr. Charlotte Abby, Dr. Cole created the "Women’s Directory", a source to aid women and children from lower socioeconomic backgrounds. Dr. Cole also joined the African American Women’s Club, an organization with many philanthropic and political activities. However, when approached by the all-white Ladies’ Centennial Committee of Philadelphia, she would reject them after learning her scope would be limited to Philadelphia’s African American community.

Dr. Cole advocated for African Americans living in poor conditions. She would even rebut W.E.B. DuBois’s claim that African Americans were dying in large numbers due to a lack of knowledge about hygiene, blaming instead overcrowded tenements and greedy landlords.

After nearly 50 years serving as an advocate for African Americans living under harsh conditions, Dr. Rebecca Cole passed away on August 14, 1922, a pioneer in her field. 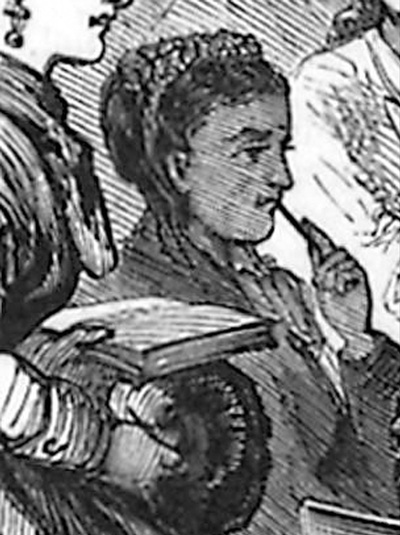 According to Villanova University’s Falvey Memorial Library “This is most likely a sketch of Rebecca Cole, the only known image of her. This image was part of a sketch of a medical lecture that appeared on April 16, 1870 in Frank Leslie’s Illustrated Newspaper.” Source: Library of Congress
Add a Comment