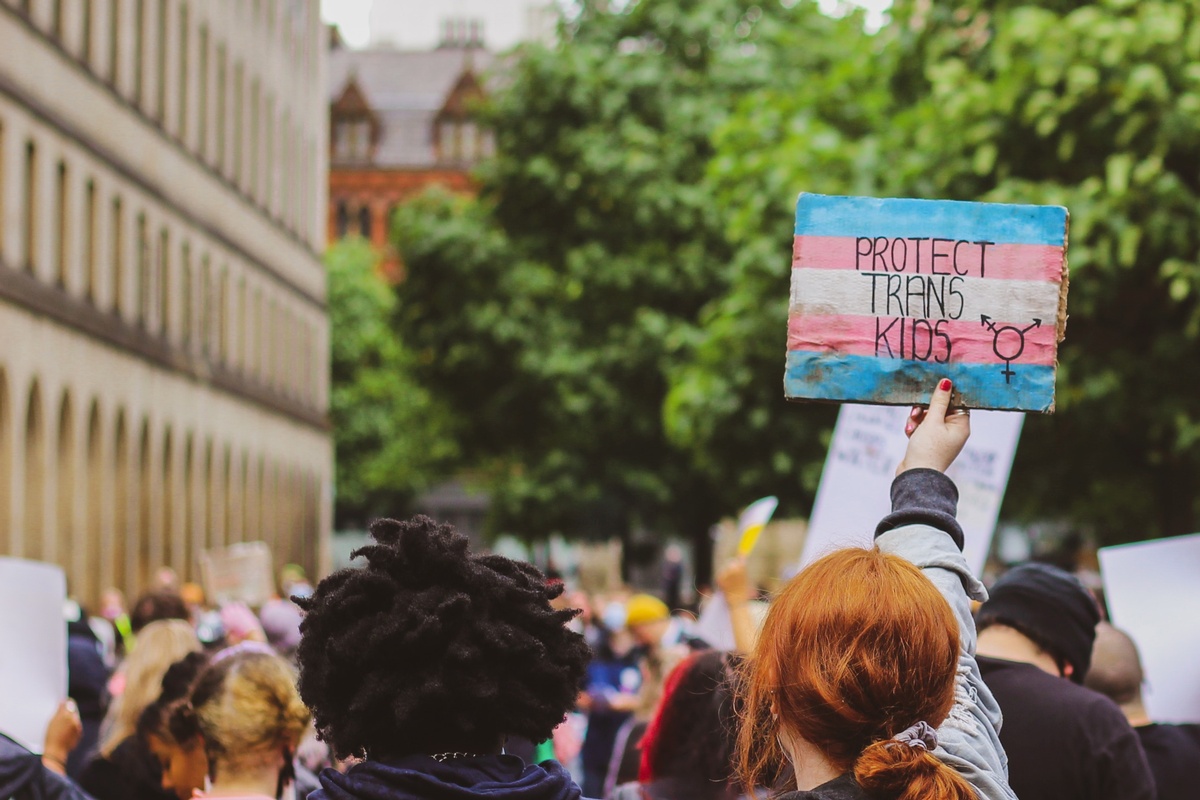 Transgender Awareness Week, held annually from November 15 – 19, helps to raise the visibility of transgender people and address issues members of the community face. The week is capped off on November 20 with Transgender Day of Remembrance, where we remember those who have passed away this year from transphobic violence.

Let me define a few terms before we proceed to the book recommendations...

Gender Assigned at Birth / Sex Assigned at Birth
Nobody is born as a man or a woman—we are born as babies. When a baby is born, the first thing that happens is the person giving birth yells "IS IT FINALLY OVER?!", and after that happens someone else yells, "IT'S A BOY!!" or maybe "IT'S A GIRL!!" At that moment, the baby has been assigned a gender/sex. That assignment though is pretty arbitrary, based on looking at the baby's genitals. This is also really weird when you think about it: the hospital will probably give them a little blue or pink hat, and people will expect this baby to be tough or sensitive, a breadwinner or a homemaker, entirely depending on their genitals. Not even an hour after being born, we have decided this for them. That "M" or "F" written down on the birth certificate? That's someone's Sex Assigned at Birth (or Gender Assigned at Birth).

Cisgender
Someone who identifies with their gender assigned at birth. They are not transgender. Many, but not all, cisgender people feel terrible dysphoria about their bodies: that their body is not slim and feminine enough, or strong and masculine enough. Some, but not all, cisgender people decide to use surgery or medicine to make their bodies more like how they want them to be, such as by getting breast implants or by taking hormone treatments.

Non-Binary / Genderqueer
Someone who does not identify as just a man or a woman. Perhaps they identify as both man and woman, sometimes one and sometimes the other, somewhere in-between man and women, or as neither man nor woman. Most non-binary people are also transgender since they were not assigned "non-binary" at birth, but sometimes that's not the case and there are indeed people who are non-binary and not transgender.

"Male" / "Female"
Human bodies are incredibly complex and cannot be reduced to just two categories. Transgender people, nor cisgender people, are "really male" or "really female." We really are all just people, who have bodies, and bodies are very diverse and that's beautiful. "Male" and "female" are just broad generalizations about common patterns: people with flat chests usually have more body hair; people with vaginas usually have wombs—but it's not always the case, and these terms generally aren't applicable or useful as medical terms to most transgender people. Even many cisgender people fall outside of these patterns. Some cisgender women don't have wombs or are quite hairy. Some cisgender men have breasts or very little body hair. Some cisgender women have androgen insensitivity syndrome and discover they have XY chromosomes later in life. Nobody is "really" male or "really" female—they simply are themselves. They can decide for themselves how to understand their own body and their own identity.

Now that we have a better understanding, here are some books by transgender authors, featuring transgender characters, and about real transgender people. 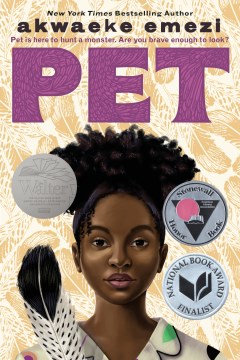 Pet by Akwaeke Emezi
Jam is a teenage girl who lives in Lucille, a post-revolutionary town where social justice-driven "angels" have defeated the "monsters" of our time and created a town where girls like Jam can live freely as themselves in safety and prosperity. Jam, who is autistic, did not speak as a baby, and the adults in Lucille accepted her as she is and taught her sign language. When she said at three years old that she was a girl, not a boy, the adults in Lucille accepted her as she is. When she approached puberty, they gave her free choice over which kind of puberty she wanted to go through. Life in Lucille is good, although all of the adults are cagey about how they got there. They don't talk about the things the "monsters" used to do, or what the "angels"—many of whom are still alive—had to do to win the civil war. One day, a terrifying monster named Pet emerges from one of Jam's mother's paintings and, communicating telepathically, tells Jam that it is hunting a "real monster" living in Lucille. The adults insist Pet must be wrong, that there are no more monsters in Lucille, but Pet tells Jam the monster lives in the home of her best friend, Remembrance. Jam, reluctantly and secretly, teams up with Pet to hunt down the monster, whoever it is.

This book is not a dystopian novel, but rather one about the trauma that lingers even when something resembling a utopia has been achieved. The story is about what happens when trauma is allowed to fester and goes unaddressed. It's a novel about healing. It shows us a better world and reminds us that nothing can truly be perfect, either. I am a grown adult and I cried when I read this book. Personally, this is my new favorite book. 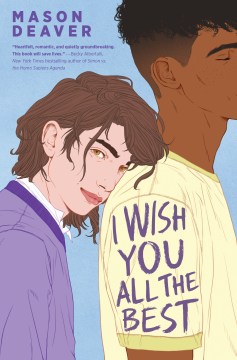 I Wish You All The Best by Mason Deaver
This is not a book about the future. This is a book about the present, inspired by the author's own experiences. Ben De Backer is disowned by their parents after they come out as non-binary, and must move in with their estranged older sister, Hannah, and her husband, neither of whom Ben has ever met. Ben tries to get through their last year of high school by laying low, only coming out to their therapist and their sister and her husband. They struggle with an anxiety disorder, in addition to the pain of their new estrangement from their biological parents. Ben meets Nathan Allan, a funny, charismatic, boy who takes Ben under his wing and befriends him. Their friendship slowly develops into something more, and Ben over time finds ways to heal and build a new, chosen, family. Life for transgender people is usually full of pain. Many of us are not in touch with our biological families. But our lives are always full of love, and beauty, and over time, slowly and gradually, we heal and learn to cope, building lives worth living—better more fulfilling lives than what we perhaps once thought we'd have had if we never came out.

This book is critically acclaimed for a reason. I love a good, found family narrative, it gets me every time. 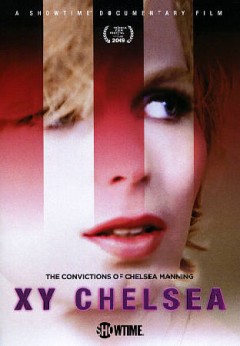 XY Chelsea by Chelsea Manning
Chelsea Manning is an international hero, and you simply have to respect how much she sacrificed for the good of the world. A lot of the time we focus on the trans people who fought for trans people; who fought for their own rights and their own freedoms. Chelsea Manning is a transgender woman who blew the whistle on the human rights violations and atrocities being enacted by the US Military against total strangers she would never know. For this, she was sentenced to thirty-five years in prison. She spent seven years in and out of solitary confinement, regularly harassed and abused while in captivity, until finally, President Obama commuted her sentence. Even while in detention, she never stopped speaking out through letters to her supporters. She never gave up on gender transition. Even in prison, she refused to be pushed back into the closet. After her release, she immediately went back into the fray of social justice organizing and speaking out against injustice everywhere, even after she was arrested and imprisoned in solitary confinement again in 2019 for another year for refusing to testify before a grand jury that was formed to charge a fellow whistleblower. 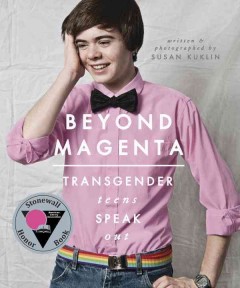 What this book does really well is capture a glimpse of the incredible diversity among transgender people. We've got all sorts of genders, socioeconomic backgrounds, and ethnicities going on here.

For more resources and recommendations, check out our Trans Day of Visibility blog post from earlier this year and our LGBTQ History Month blog posts.

Resources for Transgender Teens
We have several books in our catalog specifically for helping transgender teens including Coping with Gender Dysphoria, Trans Teen Survival Guide, and A Quick and Easy Guide to They/Them Pronouns (useful if you use they/them pronouns and want a good explainer to give to people in your life who aren't familiar.)