Up Above: Thinking about the "Little Old Lady Tost Up in a Basket"

Just in time for spring cleaning, N. C. Wyeth's The Old Woman Tost Up in a Basket is back on display in Up Above: Thinking About the Skies in Parkway Central Library. Creating and researching an exhibition is always an enjoyable and engaging experience, but the information we provide in our exhibition labels has to be brief. Most exhibition labels for objects on display are usually around seventy-five to one hundred and twenty-five words. It makes for a brief nugget-sized bit of information that’s easily read and understood by the general public. But there's so much more to say about this piece of art! Let's talk a little about the painting, its name, and the (very) convoluted history of the nursery rhyme.

The painting was created by N. C. Wyeth for the 1940 edition of the popular book, the Anthology of Children's Literature. Wyeth created fifteen illustrations for this edition, eleven of which were gifted to the Free Library in 1941 by an anonymous donor - a 12th painting from Wyeth's illustrated edition of Charles Nordhoff's The Bounty Trilogy was also purchased, bringing the gift to an even dozen. The Children's Literature Research Collection displayed all twelve paintings in the Central Children's Department until 2016, when concerns of light damage prompted a visit from Dr. Joyce Hill Stoner and her graduate students from Winterthur Museum / University of Delaware's Program in Art Conservation. Conservation of the paintings was not recommended, but Dr. Stoner's confirmation of light damage meant that a change was needed. The paintings were removed from permanent display and are now featured in exhibitions, with dedicated "light rest" periods to greatly slow further damage. When the Children's Literature Research Collection relocated to the second floor of Parkway Central Library in 2019, the Wyeth paintings moved as well, and are now often featured alongside artwork and materials housed in the Print and Picture Collection and the Map Collection. With three of the Free Library's Special Collections now sharing exhibition space in the Second Floor wing of Parkway Central, the Wyeth paintings are used to help tell new stories and inspire new ideas, like those in Up Above: Thinking About the Skies.

While the history of the Wyeth paintings at the Free Library is relatively simple, the history of the nursery rhyme is much more complicated! For starters, there's the title. Why do we say "Tost" and not "Tossed?" That answer is pretty easy: It's what Wyeth did. We use the name given to the painting and not the name used by the book. When the paintings began rotating in 2016, the backs of the paintings were scanned to record their condition - also providing a look at the information recorded there.

The verse in the Anthology was taken from the 1869 book Mother Goose's Melodies, edited by William Adolphus Wheeler (1833-1874), an American librarian. You can read the book in its entirety online here. This version is as follows:

There was an old woman tost up in a basket,

Seventy times as high as the moon.

Where she was going, I couldn’t but ask it,

For in her hand she carried a broom.

“To sweep the cobwebs off the sky,

And I will be back again, by and by.”

But earlier variations of the nursery rhyme were recorded. Around 1760, London-based publisher John Newbery1 (1713-1767) published Mother Goose's Melody: Or Sonnets for the Cradle (which you can also read online). This may be the first time the rhyme was recorded in print. It goes:

There was an old woman toss'd in a blanket,

Seventeen times as high as the moon;

But where she was going no mortal could tell,

For under her arm she carried a broom.

To sweep the cobwebs from the sky,

And I'll be with you by and by.

Scholars believe that parts of Mother Goose's Melody: Or Sonnets for the Cradle were written by Oliver Goldsmith (1730?-1774), the poet and novelist. The rhyme was a favorite of Goldsmith, who reportedly sang it to restore his spirits after his first comedy, A Good Natur'd Man received mixed reviews on opening night. Goldsmith said this in the book's introduction: .

When [Henry V of England] turned his arms against France, he composed a march to lead his troops to battle, well knowing that music has often the power of inspiring courage, especially in the minds of good men. Of this his enemies took advantage, and, as our happy nation, even at that time, was never without a faction, some of the malcontents adopted words [of the rhyme] to the king's own march, in order to ridicule his majesty, and to show the folly and impossibility of his undertaking...Here the king is represented as an old woman, engaged in a pursuit and the most absurd and extravagant imaginable; but when he had routed the whole French army at the battle of Agincourt…the very men who had ridiculed him before, began to think nothing was too arduous for him to surmount, they therefore cancelled the former sonnet, which they were now ashamed of, and substituted this in its stead, which you will please to observe goes to the [same tune]:

So vast is the prowess of Harry the Great,

He'd pluck a hair from the pale fac'd moon;

Or a lion familiarly take by the tooth,

And lead him about as you lead a balloon.

All princes and potentates under the sun,

Through fear into corners and holes away run

While no dangers nor dread his swift progress retards,

For he deals about kingdoms as we do our cards.

When this was shown to his majesty he smilingly said that folly always dealt in extravagancies, and that knaves sometimes put on the garb of fools to promote in that disguise their own wicked designs.

It’s an exciting story and very complimentary to Henry V, but scholars agree that it's complete fiction. In Nursery Rhymes, with the Tunes to Which They Are Still Sung in the Nurseries of England, Obtained Principally from Oral Tradition, (which has a very long title, and can also be read online), Edward F. Rimbault (1816-1876) wrote that the rhyme is, "as old as the reign of James the Second, to which monarch it is supposed to allude." Rimbault's telling isn't as embellished as Goldsmith's, but likewise provides no proof or connection to royalty.

Rimbault and Wheeler both mention that the tempo of the rhyme is the same as Henry Purcell's Lilliburlero. Wheeler says that the verse "...is supposed to be the original song of 'Lilliburlero, or Old Woman, whither so high?' the tune to which was published in 1678." Wheeler's dates are a little off; the march (which you can hear here) was written by English composer Henry Purcell (1659?-1695) in or around 1686, which was two years before the end of James the Second's reign. Politician Thomas Wharton (1648-1715) wrote satirical lyrics that lambasted James’ politics, in or around 1686, making the tune exceptionally popular.2

Although James the Second was linked to the melody, there's no mention in historical record connecting the Old Woman to royalty. How she came to follow the same melody as Lilliburlero still remains a mystery.

1 You probably know Newbery's name because of the Newbery medal, awarded by the Association for Library Service to Children, a division of the American Library Association! 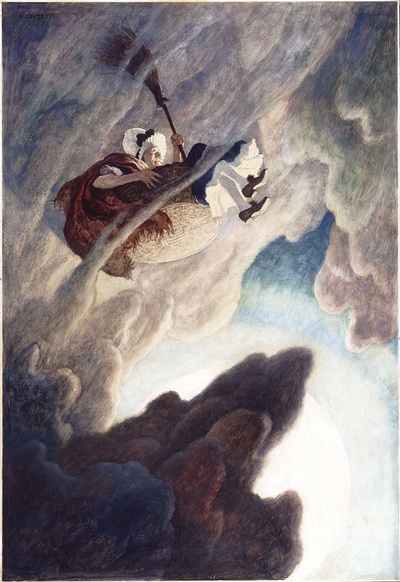 N. C. Wyeth's illustration from the second edition of the Anthology of Children's Literature (1940). 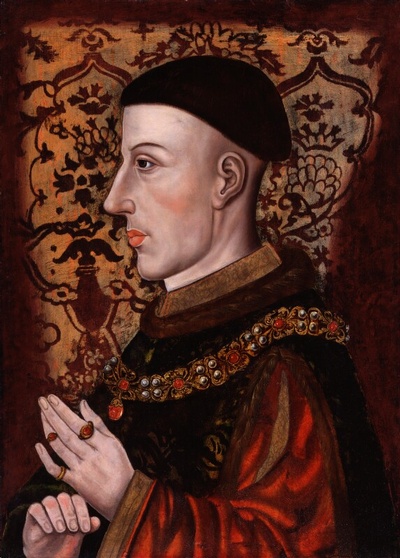 A portrait of King Henry V, courtesy of the National Portrait Gallery, London 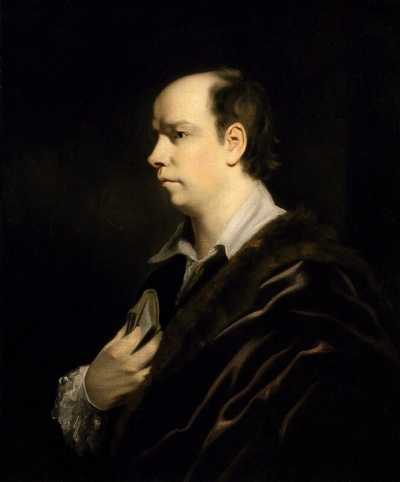 A portrait of Oliver Goldsmith, courtesy of the National Portrait Gallery, London
2 Comments | Add a Comment
What's with all the weird spacing after sentences? There are 2 and sometimes up to 3 spaces after each sentence...
PhillyGrammarian - Philadelphia
Hi PhillyGrammarian, Thanks for the comment! It looks like there was a formatting issue; I'll make sure to notify our IT team to fix it. :) Best, Chris
Chris B. - Philadelphia