Lloyd Alexander Papers at the Free Library of Philadelphia

Archives assistant Celia Caust-Ellenbogen is posting on behalf of the CLIR “Milestones in 20th Century American Children’s Literature” project this week, writing about her experience processing the Lloyd Alexander papers. Here’s what she has to say:

I’m really lucky to be working with the papers of Lloyd Alexander, author of many acclaimed children’s books including the The High King (Newbery Medal winner, 1969) and The Black Cauldron (made into a Disney film in 1985). I’ve been a fan since elementary school when I read Time Cat and The Iron Ring. He donated most of his papers to the Free Library in 1995, and we recently received a CLIR grant to process them, along with the papers of five other children’s book authors and illustrators.

Lloyd Alexander was a very successful children’s book author, but what I didn’t know until I started sorting through his papers is that it took him a while to settle into writing for children. At first he wanted to write for adults, and we have boxes and boxes of his unpublished manuscripts, often accompanied by letters of polite rejection from publishers or literary agents. He did successfully publish several books for adults, including Janine is French and My Five Tigers. But while nearly all of his manuscripts for children’s books were eventually published, a good deal of the writing he did for adults is still sitting in boxes in the Free Library of Philadelphia basement.

As an archival processor, I think it is harder to figure out what to do with unpublished manuscripts versus published ones. There are recognizable forms, and a definite linear order, to the stages of pre-published materials—rough draft, final draft, setting copy, galley proofs, printer’s proof, advanced reader’s copy, etc. But the bits and pieces of unpublished manuscripts might be in no particular order, and in Alexander’s case are often scattered and housed in different chronological order. Alexander would get frustrated with one piece and lay it aside, but would often revisit it a few years later.

I stumbled into a mystery last week when I opened a box and discovered a big bundle of index cards. There was no title associated with the cards, so I didn’t know what to do with them. They are unusual in terms of Alexander’s process: generally he wrote notes and outlines on sheets of paper. They were also unusual in that most of the cards were numbered, not only with chapter-section markings, but with dates (no year, but month-day). I wondered to myself if the dates might refer to the day Alexander wrote the card.

Today I had a breakthrough when I discovered my metaphorical Rosetta Stone in a folder labeled “miscellaneous.” It is a handwritten calendar annotated with events, which again is anomalous in Alexander’s process. But when I took out the index cards and cross-checked the dates, I was thrilled to find that the events line up! The top index card, dated April 11, says “s p & a have disch celeb in tango du chat”—April 11 on the calendar says “Pre-disch celebration in Tango du Chat.”

The best part is that the folder contains not only the calendar, but other pages of notes and outlines, one of which—joy of joys!—has a title! Now I know that the pages in the folder, as well as those mysterious index cards, are planning materials for Another Country, and I can put them together with the rest of the manuscript in Box 2.

Sometimes, being an archivist feels a lot like solving a jigsaw puzzle. 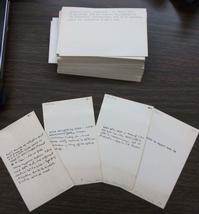 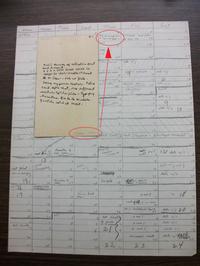 The calendar that provided the answers
5 Comments | Add a Comment
hey i know that Lloyd Alexander write the stone.we have a stupid book report on the stone and we cant find the freaken date of the stone book.sorry nfor the freaken part but we have been looking for the last 5 hours.please help
Ryan Parodi - South Carolina
Thanks for your comment. Lloyd Alexander did not write any books with the word "Stone" in the title. Are you maybe thinking of The Sword and the Stone, by T.H. White? If you need help with a book report on that title, you can email erefccd@freelibrary.org and they can help! -Archives, CLRC
Adrienne - Philadelphia
Lloyd Alexander did in fact write a short story titled "The Stone," which was included in the longer work "The Foundling and Other Tales from Prydain" and was published in 1973. Noah Hansen, Circulation Assistant Julia Hull Library Stillman Valley, Illinois www.juliahull.org
Noah Hansen - Illinois
Thanks for the citation, Noah! We didn't think to search his short stories, but were only looking for a book title. Lucky for us you went a step further!
Adrienne - Philadelphia
Ms. Caust-Ellenbogen's blog very interesting and well informed. It really brings to life the daily work of an archivist. Looking forward to more entries by this young talent. SASusan....
Susan - San Francisco