Charles Dickens and the Free Library

Oprah recently chose two books by Charles Dickens--A Tale of Two Cities and Great Expectations--as her next book club selections. I've enjoyed Dickens since I was a child, beginning with A Christmas Carol and Oliver Twist, later progressing to Bleak House, Little Dorrit, and more. I love his richly drawn characters, his focus on those people that society frequently casts aside, his blistering critiques of the inequities of Victorian social structures and institutions, his ability to spin a fantastic yarn of a story... you could say I'm a fan! I've always debated the impact of Charles Dickens' books on my life as a chicken-or-the-egg thing: Am I a massive anglophile with a tendency to ramble when writing because I read a lot of Dickens in my formative years? Or was I drawn to Dickens because of an inherent wordiness and penchant for tweed? Either way, I'm glad that Oprah chose two of his books and hope that more readers discover--or rediscover--Dickens.

For Dickens fans in Philadelphia, did you know that there's a life-sized bronze statue of the man in West Philly's Clark Park? AND, did you know that the Free Library's Rare Book Department has a fantastic collection of Dickens materials? We have everything from first editions of many of his works (including the copy of The Pickwick Papers presented by Dickens to his sister-in-law, Mary Hogarth), to original drawings, letters, and other memoriabilia, to his stuffed pet raven, Grip (the inspiration for Edgar Allan Poe's famous poem, "The Raven"!) General tours of the Rare Book Department occur daily, Monday through Friday, at 11 a.m. You can also call the department at 215-686-5416 to make separate arrangements for a visit. 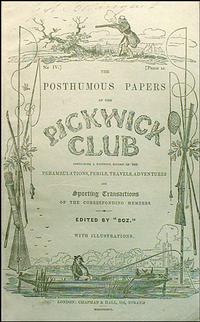 The Posthumous Papers of the Pickwick Club by Charles Dickens
2 Comments | Add a Comment
I just purchase " a Tale of two Cities". I will keep you updated how interesting it was.
mike - malaysia
i have read oliver twist. It is good book. troy
troy -