Happy 100th Birthday, Evaline Ness! Born on April 24, 1911, Ness was an award-winning author and illustrator of children’s books whose glamorous life would translate well to the silver screen. Born to a disappointed photographer and an even more disappointed Southern belle whose romantic dreams had been dashed by too many children and too little money (as Ness would later put it), she was an imaginative child who illustrated her sister Josephine’s stories with collages made of pictures she ripped from magazines. Her penchant for illustration continued in high school in Pontiac, Michigan, and in college at Ball State Teachers College. She also studied library science for a summer, but never became a librarian. Instead, her studies at the Chicago Art Institute led to a more stylish job as a model and artist at Mrs. Parson’s Fashion Studio. In the early 1930s, she met famous Prohibition agent Eliot Ness on a train, and although both were married to other people at the time, by 1938 both had divorced and were free to marry. While he worked in Washington, D.C. during WWII, she joined the American Women’s Volunteer Services. Even though she got to wear a “snappy navy blue uniform with brass buttons and a hat to match,” her husband objected to her spending her time squiring admirals and generals to cocktails parties all over town and suggested she go back to art school at the Corcoran Gallery of Art instead. “If Renoir could paint through two wars,” he assured her, “you are allowed to paint though one.”

At the Corcoran Gallery of Art, Ness met the only teacher she said ever made sense to her, Richard Lahey. His inspiration led her to spend all of her time painting, which in her husband’s eyes made her “boring.” They divorced in 1946 and she went to New York, where she once again took up fashion illustration. After three years, tired of the rat race, she took off for Bangkok and Rome, studying at the Accademia di Belle Arte, then making her way back to New York after a stay in San Francisco. Back in New York, she was offered work as a children’s book illustrator, which she was at first reluctant to accept, nervous about whether promised royalties would actually ever appear. But she found she loved the work. In her 1967 Caldecott acceptance speech, Ness said “During the months of work on the book, I realized the same kind of peace and enjoyment that comes when I paint for myself. There were no changes, no picking at details, no hot breath on my neck because of a deadline, which in advertising is always yesterday. . . . It was heaven and I did not want to leave. I was hooked.” Her first illustrations for children’s books were done in 1954 for The Story of Ophelia, by Mary Gibbons. Josefina February (1963) was the first book that Ness both wrote and illustrated. By 1967, she had won the aforementioned Caldecott medal for Sam, Bangs, and Moonshine.

In 1960, Ness married Arnold Bayard, a mechanical engineer from Philadelphia. While living here, Ness was introduced to author Lloyd Alexander by their mutual editor, and was convinced to illustrate his popular Prydain series, including The Book of Three and The Black Cauldron and the picture books The Truthful Harp and Coll and His White Pig. She generously donated many of her illustrations for Alexander’s work to the Free Library of Philadelphia in the late 1960s and early 1970s, perhaps due to her friendship with the children’s librarian Carolyn Field. These illustrations are now in the Children’s Literature Research Collection archives at the Free Library and were recently catalogued thanks to a CLIR grant. You can see a finding aid and a list of the materials on the Philadelphia Area Consortium of Special Collections Libraries website, here! This fascinating, globe-trotting, immensely talented woman led a very interesting life, and we're proud to house some of her work. Also, we think Cate Blanchett should play her in the movie.

This photo of Evaline Ness at home in her apartment, in front a tapestry she made herself, is from American Artist magazine, January 1956. 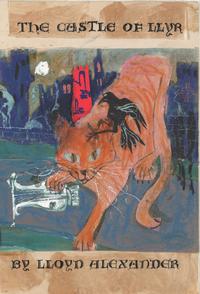 Preliminary art for The Castle of Llyr book jacket. Text by Lloyd Alexander, illustrations by Evaline Ness, circa 1966.
Add a Comment