For those of you not familiar with Carolyn Haywood’s books (and who didn’t read last week’s blog post), imagine stereotypical 1950s children’s literature: safe plots, simplistic characterizations, and genial outcomes. Little boys and girls who live in the suburbs with their mommies and daddies get into mischief, but everything is resolved in time for the best Christmas ever. Take for example Haywood’s first book, “B” Is for Betsy (1939). Betsy is a little girl who is afraid to start kindergarten, but by the time summer rolls around she loves it so much she doesn’t want to leave. Haywood’s wholesome books about neighborhood antics have been a favorite on Christian homeschoolers’ syllabi for decades.

While processing the Carolyn Haywood papers at the Free Library of Philadelphia, however, I discovered a darker side to Carolyn Haywood. An unpublished manuscript called Junior is making me question everything I thought I knew about her. It is about a fourth-grader named Octavius Smoot Junior, and unlike Haywood’s other characters, Junior has real problems. His father is in jail for selling heroin (!), so he lives with his mother and grandfather—both of whom beat him on a regular basis (!!). As if that isn’t enough, poor Junior also has to contend with pedophiles trying to abduct him (!!!). This, dear reader, is not a Betsy or Eddie book.

In one chapter of the manuscript, Junior gets his report card and takes the long way home in order to forestall the inevitable beating he will receive when his mother sees his poor marks. He is accosted by a gang of teenagers who steal all his things and so, terrified and bereft, Junior wanders even farther from his route home. Outside an Arts Theatre that is showing a French film, a man calling himself Jack offers to buy Junior a ticket and some popcorn. Junior accepts because he is hungry, and tells the man about his troubles. Jack is sympathetic, but during the movie he starts to touch Junior in ways that make him uncomfortable. Luckily, Junior manages to escape Jack’s grasp: while exiting the theatre, he sees his teacher Miss Katie and runs to her for protection. Miss Katie takes Junior to her house for chocolate cake and good advice, and the manuscript cuts off shortly thereafter.

Finding the manuscript for Junior has given me a lot to think about. The dark, heavy themes of domestic violence and sexual abuse are worlds away from lighthearted books like “C” Is for Cupcake, Eddie’s Green Thumb, and Betsy and the Circus. What inspired Haywood to write this story? By the time she started working on it (about 1979), some book reviewers were already criticizing Haywood for writing sugar-coated stories with no relevance to real life problems. Was this an attempt to show her critics that she was capable of writing serious, significant works? Did something happen in Haywood’s life that made her, temporarily at least, more conscious of some of the issues affecting unlucky boys and girls? Did one of the children who frequently posed as Haywood’s models reveal an upsetting incident?

There’s little supporting material in the Free Library’s Haywood collection about the Junior manuscript. We’re not sure why it was never finished and published. But without a doubt, Junior has been the most interesting find so far in the Haywood collection. This is exactly why archival processing is so exciting: The manuscript may have sat untouched in a box forever if we hadn’t started processing the collection with the help of our CLIR grant. But now, the world will know about this intriguing manuscript, and perhaps it will even entice some of you out there to carry out new research on Carolyn Haywood. I’d love to hear what you think. 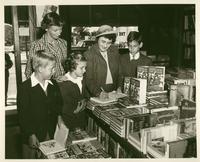