In general terms, matter is everything – it's anything that has mass and takes up space (the substance that makes up physical objects). In more specific terms, matter is made up of atoms and molecules, such as protons, neutrons, and electrons. So antimatter is a form of matter that is equal in mass to ordinary matter but with opposite electrical properties. For instance, antimatter has “positrons” which are like electrons but with a positive charge and “antiprotons” which are like protons but with a negative charge.

Now the cool thing is, when matter and antimatter collide, they annihilate each other in a burst of high-energy photons – meaning energy (lots of it) is created. Now before you get too excited about a new source of energy, keep in mind it would cost (according to NASA) “one-hundred-billon dollars to create one milligram of antimatter” and not to mention antimatter can only be collected very slowly, a few particles at a time.

The NASA website also reminds us that it would cost far more energy to create antimatter than the energy one could get back from an antimatter reaction. Also, antimatter is a very volatile substance and would need the same safety precautions as nuclear reactors.

Well, at least we know antimatter is real and scientists are currently making advancements, such as CERN (European Organization for Nuclear Research), where scientists recently created antihydrogen for the first time. For now, I will just dream of a future with starships fueled by antimatter that boldly go where no man has gone before. 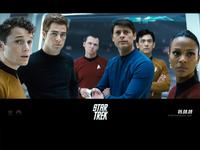 Promo Photo for the Star Trek movie © Paramount Pictures
1 Comment | Add a Comment
Based on OASIS, I believed the SOASIS of translation, transformation, and the transfiguration of a man spirit, soul and body.
David Zion