Carolyn Haywood once described herself as “grand student of Howard Pyle.” Haywood was heavily influenced by several of Pyle’s students: Jessie Willcox Smith (1863-1935), Elizabeth Shippen Green Elliott (1871-1954), and Violet Oakley (1874-1961). They were known as the Red Rose Girls for the time that they spent living and working at the Red Rose Inn in Villanova, Pennsylvania. The Red Rose Inn was the trio’s respite from the bustling and tiresome streets of Philadelphia. The charm and romanticism of the inn offered the women distance from the distractions of the outside world. The inn allowed them studio space to flourish. Together with their friend and housekeeper, Henrietta Cozens, they later moved down the road to the house that came to be known as Cogslea. C-O-G-S, for each of the letters in their last names, became a sort of surname for the women. Their artwork and friendship made them famous in their own time.

Jessie Willcox Smith was a notoriously proper woman. She studied under Thomas Eakins at the Pennsylvania Academy of Fine Arts, though she felt that he was a “madman” and kept a significant distance from the scandal that surrounded him. Since 1885 was not a time when many women would receive such an education, Smith was determined to pursue a life as an artist on her own terms. Carolyn Haywood described her as having an “impersonal sense of her work” and though “she seemed to work without egotism,” she approached her work with a professional manner and was incredibly mindful of her deadlines. Her paintings and illustrations were of children in a vibrant and idyllic world. She was well known for her illustrations of children’s literature, and also provided many covers for Good Housekeeping magazine.

Elizabeth Shippen Green was the most outgoing of the three women. She began illustrating at an early age and was encouraged to attend the Pennsylvania Academy of the Arts, her father’s alma mater. Green was not interested in the fine arts, but wanted to focus on illustration. When she was 29 years old Green signed an exclusive contract with Harper’s Monthly Magazine that lasted for 23 years. Haywood said that “her sense of humor did not stop with an idea, it fulfilled it.” She was meticulous in her work and was known to be a perfectionist. When she married Huger Elliott, she had a well-established career and she continued to be prolific well into her later years.

Violet Oakley was the youngest of the Red Rose Girls. She was born into a family of painters and felt that her career choice was hereditary. She established her place in the art world with the commission for the murals in the Governor's Reception Room at the Pennsylvania Capitol Building in Harrisburg, Pennsylvania. Her work proved to be so successful that the commission was extended to include murals in the Supreme Court Building there. Her work on such prominent murals allowed her financial independence and elevated her status in Philadelphia society, at a level not typically reached by a woman based on her own merit. As Carolyn Haywood described her, Oakley “had a great sense of perfection…she could forgive sin, but not stupidity.”

It should be noted that Henrietta Cozens was friend and housekeeper to the Red Rose Girls. She first lived with them at the Red Rose Inn in Villanova, PA in 1902. She was a horticulturalist and kept the many gardens on the grounds of each of their homes. She also oversaw the household at Cogslea and later moved with Smith, in 1914, to a nearby home and studio that would be known as “Cogshill.”

Carolyn Haywood shared a friendship with each woman and maintained correspondence with them that is now in her collection in the Children’s Literature Research Collection at the Free Library of Philadelphia. Haywood was a student of both Green and Smith and she worked as Oakley’s assistant on several murals. The influence from each woman’s distinctive style can be seen throughout Haywood’s early work. Much of Jessie Willcox Smith’s artwork focused on children, which is reflected heavily in Haywood’s illustration of children. The Christmas cards that Elizabeth Shippen Green Elliot sent to Haywood feature pen and ink drawings similar to those featured in Haywood’s books. They were more than just teachers for Carolyn Haywood; they provided the inspiration for her to live her life as an artist. Haywood’s career path has strong similarities to Oakley’s. Haywood spent much of her early career working on murals for the Manayunk National Bank and painting portraits of Philadelphia society. Carolyn Haywood looked to the Red Rose Girls for inspiration in her lifestyle and career. She wrote, “as an author and illustrator of books, I owe a great deal to these three distinguished women who shared what they knew with me, inspired me, and counseled me. They have had my love and gratitude for the greater part of my life and enriched it immeasurably.”

Carolyn Haywood posed for this painting by Violet Oakley, which currently hangs in the Chestnut Hill branch of the Free Library 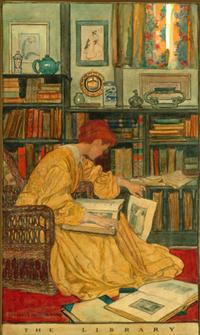 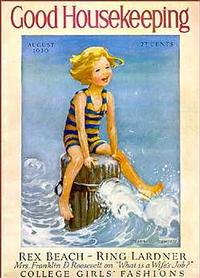