Inspired by the Weather

I feel like the weather has been on everyone's minds lately, from the insufferable heat wave of a few weeks ago to the now seemingly daily deluges of rain. (Not to mention recent news about how NOAA funding cuts will affect future forecasting.) I've always been fascinated with the weather--both the science behind the storms as well as the moods and memories evoked by different types of weather. My favorite TV channel as a child was The Weather Channel, I kid you not. A highlight of my college years was spotting a Weather Channel meteorologist on the local beach reporting on an offshore hurricane. And to this day, I will still turn off all of the lights in my house to watch lightning flicker across the sky during a nighttime thunderstorm.

Not surprisingly, I'm also a sucker for a good movie or book in which weather plays a prominent role. Here are some recommendations to entertain your inner meteorologist:

Twister - I saw Twister an embarrasingly large number of times in the movie theater and would make whatever poor friend that agreed to come along sit with me in the front row. Yes, it's unrealistic, and yes, it's a little silly, but how I love this movie to this day.

Night of the Twisters by Ivy Ruckman - Are you sensing a theme here? Maybe I should have warned you about my particular interest in tornadoes. Night of the Twisters is a children's chapter book that details the ordeal of 12-year-old Dan Hatch and his friend Arthur in the wake of a powerful storm. Does anyone else remember the extra-cheesy Family Channel movie adaptation starring Devon Sawa? No? Just me?

Tracks by Louise Erdrich - Though not as explicitly weather-based as my first two recommendations, Louise Erdrich's Tracks is a quietly haunting and beautiful novel set in the plains of North Dakota on an Ojibwe reservation. Erdrich's descriptions of the snow and the cold cut right to the bone.

Cloudy with a Chance of Meatballs by Judi Barrett - This beloved children's picturebook tells the story of some very wacky weather that descends upon the town of Chewandswallow. And there's a sequel: Pickles to Pittsburgh!

Rainy Rainy Saturday by Jack Prelutsky - A fantastic compendium of clever and funny children's poems about rainy days and the many emotions a washed-out Saturday can evoke.

Murder on the Orient Express by Agatha Christie - A man is murdered on an overnight train trapped on the tracks in a heavy snowstorm. Leave it to the famed detective Hercule Poirot to deduce "whodunit" in this highly engaging page-turner!

The Ice Storm - This engaging film thoughtfully explores some of the cultural and political issues of 1970s domestic life against the backdrop of confining winter weather.

What are some of your favorite books and movies in which the weather plays a starring role? 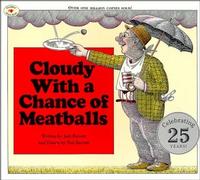