Dancer, actor, singer, choreographer, director. Gene Kelly (1912–1996) added each of these impressive “job titles” to his résumé during his time in Hollywood, and when someone asks me who my favorite actor is, I can’t think of anyone who compares to him. While Fred Astaire glided gracefully across floors, Gene Kelly pounded on them in a way that no one before him had. Combining tap, ballet, and schoolyard athletics, he redefined what it meant to dance in the postwar years.

Yesterday marked the day that Gene would’ve celebrated his 99th birthday. From DVDs to biographies, the Free Library has a treasure trove of materials to help you celebrate one of America’s greatest showmen.

Singin’ in the Rain: I was in my teens when I first watched this film. I couldn’t believe my eyes; I’d never seen anyone move quite like Gene Kelly. To this day, I watch this movie whenever I get the chance. This film, full of moments comedic, heartfelt, and acrobatic, stands the test of time and is, I think, one of the of the greatest Hollywood soundstage musicals ever made.

An American in Paris: Gene’s tap shoes meet George Gershwin’s melodies in another classic Kelly vehicle that concludes with an amazing 16-minute muscular ballet. Two winters ago I had the opportunity to see Leslie Caron, Kelly’s costar in the film, when she spoke at the Free Library’s Author Events Series. I loved when she talked about dancing with Gene, and her book Thank Heaven is worth reading for its insights into old Hollywood.

On the Town: Three sailors on shore leave take viewers on a wild romp through New York City in one of the first films to be shot on location. Playing next to Kelly is a young Frank Sinatra. While his dance moves don’t quite hold up to his legendary voice, this movie remains a must-see, full of charm, incredible choreography, and breathtaking views of mid-century New York

Gene Kelly: Anatomy of a Dancer: Part of the American Masters television series, this documentary focuses on Gene’s immeasurable contributions to American dance and film. With video clips of Gene’s dancing that will make your draw drop (How’d he do that on roller skates!?), commentary with film and dance scholars, and interviews with those who worked with and knew Gene, this documentary will make you want to rush out and watch all his films, guaranteed.

The Memory of All That: Love and Politics in New York, Hollywood, and Paris: I discovered this memoir serendipitously, while going through the Free Library’s shelves. Written by Betsy Blair, Kelly’s first wife, it chronicles not only life behind the scenes with the dancer, but what it was like for her trying to carve out a career in show business while being a wife, mother, and politically active leftist.

I could go on and on with my favorite Gene Kelly recommendations, but I’m interested in what everyone else thinks – What are your favorites? 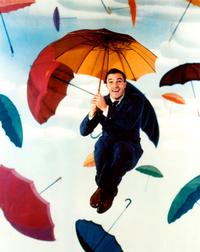