The Book of War: Folios from the Razmnama in the Rare Book Department, October 21st to November 10th.

Among the many treasures of the John Fredrick Lewis Collection in the Free Library of Philadelphia are twenty-five elaborately illustrated folios from a single Mughal manuscript, the Razmnama (literally, "Book of War"), dated to 1598–99. This entire collection will be on display for a limited time only.

The manuscript that contained the Free Library's pages was created during the reign of the great Mughal Emperor Akbar (reigned 1556–1605). Although the Razmnama is written in Persian, its subject does not emerge from the Persian literary tradition. Rather, it is a translation of the Mahabharata, one of the great epics of Hinduism.

This Razmnama includes many exquisite and elaborate illustrations that reveal Indian, Persian, central Asian, and even European elements speaking to the diverse cultural, religious, and linguistic character of the Mughal court. Although pages of this Razmnama, originally numbering in the hundreds, are now dispersed in collections around the world, they were once bound into a single book.

The imperial Mughal painting workshop was established by two master artists brought to India from the Persian Safavid court by the Emperor Akbar’s father, Humayun (ruled 1530–40 and 1555–56). In his zeal to create a world-class painting atelier, Akbar subsequently recruited many Indian-born artists trained in the various local traditions that had thrived in the subcontinent for centuries under Jain, Hindu, and Islamic patronage. Over Akbar’s half-century reign, his workshop gradually developed a new and distinctive style of painting that included the ideas, techniques, and materials brought by these regionally and religiously diverse artists.

In both text and illustrations, the Razmnama speaks to the diverse cultural, religious, and linguistic character of the Mughal court. The text represents the effort of a Muslim ruler to understand the foundations of Hinduism, so deeply rooted in his kingdom; the images herald the creation of a new artistic language.

This exhibition was originally curated by Yael Rice, an art historian at the Philadelphia Museum of Art. The display is timed to coincide with this year’s Schoenberg Symposium, “Writing the East: History and New Technologies in the Study of Asian Manuscript Traditions” (http://www.library.upenn.edu/exhibits/lectures/ljs_symposium4.html). The Free Library’s Razmnama leaves were exhibited at the Museum in 2007. Here is a link to the past exhibition: http://www.philamuseum.org/exhibitions/267.html

Viewable in the Rare Book Department on the third floor of the Parkway Central Library. Open Monday-Friday, 9 AM-5 PM. 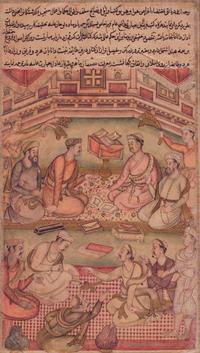 Hindu and Muslim Scholars Translate the Mahabharata from Sanskrit into Persian 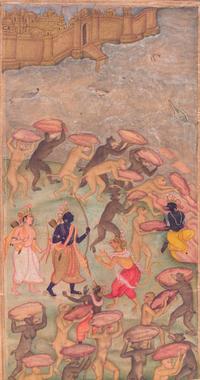 The Monkeys and Bears Construct a Bridge to Lanka
2 Comments | Add a Comment
It is good to see posts that give truly quality information.I'm definitely going to look into it.Thanks for the encouraging words.I am really very impress with your article. http://www.artezanal.com
Classicos do Design - Brazil
I had to hurry reading your blog, I had to impress my gf. IT WORKED lol
Joseph Antony