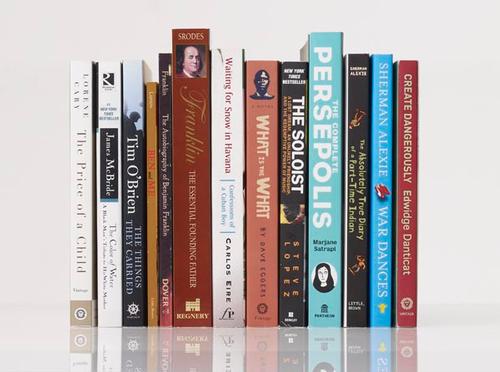 2003: Lorene Cary, The Price of a Child
2004: James McBride, The Color of Water
2005: Tim O’Brien, The Things They Carried
2006: Benjamin Franklin, The Autobiography of Benjamin Franklin; Robert Lawson, Ben and Me; James Srodes, Franklin: The Essential Founding Father
2007: Carlos Eire, Waiting for Snow in Havana: Confessions of a Cuban Boy
2008: Dave Eggers, What is the What
2009: Steve Lopez, The Soloist
2010: Marjane Satrapi, The Complete Persepolis
2011: Sherman Alexie, War Dances and The Absolutely True Diary of a Part-Time Indian

In celebration of One Book’s 10th anniversary, we want to hear about your thoughts, memories, and favorite One Book selections over the past 10 years! Share your comments below.