Dickens of the 21st Century

Next month marks the 200th birthday of Charles Dickens. With brightly colored banners hanging outside Parkway Central, Rare Book Department exhibitions, special storytime readings, and our very own Dickens impersonator, the Free Library is ready for the celebration! We’re not the only ones venerating the inimitable author’s birthday, though—in honor of the bicentenary, numerous Dickens adaptations and modern updates have sprouted around the globe. Here are some highlights of Dickens in 2012:

• BBC’s Radio 4 is featuring dramatizations of classics like A Tale of Two Cities, and podcasts about Claire Tomalin’s biography, Dickens: A Life, that came out in 2011. The freshest adaptation, however, comes with Ayeesha Menon’s reinterpretation of Martin Chuzzlewit. Her Mumbai Chuzzlewits is set in modern-day India amongst a Catholic community. Catch all the excitement here in a serialized podcast.

• The BBC’s got another interesting salute to Dickens and his unfinished novel, The Mystery of Edwin Drood. Dickens died in 1870, leaving the novel’s ending, well, a mystery. In fact, it was only about halfway complete. In 2012, the BBC takes on the challenge of figuring out what would have been. In the two-part series, The Mystery of Edwin Drood, writer Gwyneth Hughes gives the novel an ending, along with some traditional Dickens drama.

• In early April, PBS will feature an adaptation of Great Expectations as a part of their Masterpiece Classic collection. Gillian Anderson, of X-Files fame, takes on the role of the bitter Miss Havisham. This won’t be the only time this year that this role will be reprised; a film version of Great Expectations will also hit movie screens in 2012, with Helena Bonham Carter as Havisham.

And remember, the Library's Dickens celebrations will happen throughout 2012! A full listing of events can be found here. 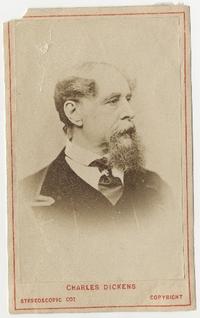