Looking Back at the First Annual Academy Awards

With all the glitz and glamour that Hollywood is known for, it is easy to imagine that the Oscars have always looked like they do now with red carpets and galas and tear-soaked speeches.  Yet, if you are watching the 84th Annual Academy Awards presentation live this Sunday, take a moment to compare this year’s proceedings with the first, which was held May 16, 1929.  As the event was more banquet than ceremony, it was held in the Blossom Room of the Hollywood Roosevelt Hotel, and rather than sitting in rows of plush seats like those at the Kodak Theatre, the current home of the Awards, the 270 guests, who had paid $5.00 per ticket to attend, sat around tables for dinner and those called up to receive statuettes or honorary scrolls were seated at the head table. Dancing followed, and it was only after this that host Douglas Fairbanks began the formal presentation. With a typical running time of three and a half to four hours, it would be a surprise to modern audiences if the ceremony were scaled back to the 1929 time of five minutes, which was the case in part because there was only one formal speech and one musical performance. We would also have to get used to not seeing the iconic envelope, as the winners in every category had been announced to the industry and the public a full three months prior to the Awards.

However, as many differences as there are, it seems that history has a way of repeating itself.  The first film to ever win Best Picture was a silent film in black and white. Wings, produced by Adolph Zukor at Paramount Studios and directed by William Wellman in 1927, was a spectacle about aerial battles in WWI and starred Clara Bow and Charles “Buddy” Rogers.  So far it is the only silent film in Oscar history to win Best Picture, but with the French film The Artist up for the award, maybe this year will see another such film added to that list.

The Wings images below are scans of items in the Free Library's Theatre Collection.  If you want to view the movie, Paramount recently released a restored and remastered verson on DVD and Blu-ray.

Note that "Oscar ©" and "Academy Award ©" are trademarks and service marks of the Academy of Motion Picture Arts and Sciences. 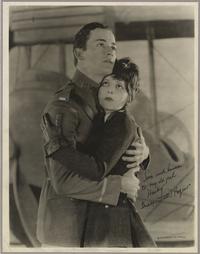 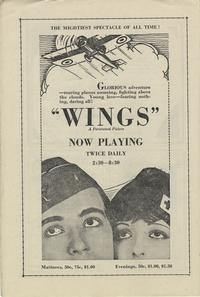 Page from the program from the National Theatre in Washington, DC from Septemeber 1928.
Add a Comment