When Charles Dickens died suddenly of stroke in 1870 he had written half of a novel, The Mystery of Edwin Drood.  Dickens published all of his novels in serial format and wrote the chapters sometimes just weeks before they were published.  So when he died with Drood only half written, it really was just that, only half written.  Any half-finished novel by Dickens would have long fascinated readers, but Drood was a murder mystery, and the questions of the half-finished mystery have long tantalized readers and writers to know whodunit.  Who murdered Edwin?  Was Edwin even murdered?  Many books have been published over the years, some attempting to finish the novel and some laying out the facts of the case.

Matthew Pearl’s The Last Dickens is not a continuation of Drood, but rather a fictionalized account of an investigation by Dickens’s American publisher James Ripley Osgood.  Osgood attempts to discover Dickens’s intentions for finishing Drood, but becomes involved in a much more dangerous conspiracy involving opium smugglers, publishing pirates and murder.

The Last Dickens, like all of Pearl’s novels (The Dante Club, The Poe Shadow and the brand new The Technologists), is also a finely researched work of literary history.  We walk the streets with 19th Century writers and publishers and see their world as they saw it.  Pearl’s novels are like literary time-machines, showing us the moments of creation of the greatest literary works and giving us an insight to what it was like for the first readers of those works.

On Tuesday night March 6, Matthew Pearl will be visiting the Free Library of Philadelphia to talk about Dickens and Drood and how he recreated this moment of literary history.  Hope you’ll join us. http://bozpearl.eventbrite.com/

And the following week, on March 15, our Dickens Literary Salon will be discussing The Mystery of Edwin Drood.  Do you think Edwin was murdered?  Who do you think did it?  Come join us for a lively discussion in the beautiful Elkins Room in the Rare Book Department. http://flpedwindrood.eventbrite.com/ 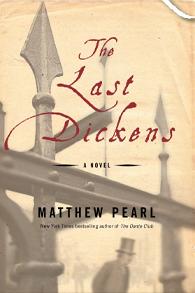