We could write a billion posts about Philadelphia musicians who’ve taken their instruments to new heights. Grover Washington with his sax. Lee Morgan on trumpet. But, as far as playing the bass goes, no one can pluck, pop, slap, and really innovate on the low end quite like Stanley Clarke -- born on this day in North Philadelphia, 1951.

While he was still a student at Roxborough High, Stan joined the All-Philadelphia Senior High School Orchestra, first on violin, then cello, and finally settled on bass. In those early years, Stan loved jamming around Philly with his friends. But at that point he didn’t even own an amp. So he was able to get his friends to lend him theirs… but that led to a very peculiar status around the city, as he told Guitar Player magazine in 1980:

“I used to have this reputation in Philadelphia for being the loudest bass player in the world. Every time I’d borrow an amp from somebody, I’d blow it up.  And to this day, there are guys that still talk about it in Philly.”

After three-and-a-half years studying string bass and composition at the Academy of Music, Clark joined Chick Corea in the fusion band Return to Forever. He released his debut solo album a year later. And the rest is history!

If you’re interested in learning more about Stanley Clarke, we’ve got tons of cd and vinyl including his solo works and collaborations with other artists. We even have a lot of the films he’s scored on DVD. And it’s all free with your library card!

Here’s just two of our favorite resources here at the Parkway Central Library’s Music Department. You can click the links to view the catalog record or place a hold.

Contains essays on Stan Clarke – which touch on his time in Philadelphia in the 1970’s – and other jazz greats. Also a great resource for learning about other jazz musicians!

Now you can play like Stanley Clarke! Includes how to play the slap-and-double stop chug of School Days. And it’s got a cd and notation for 15 of his other bass lines. What’s your favorite Stan Clarke line? 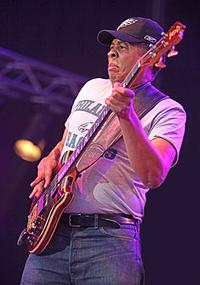 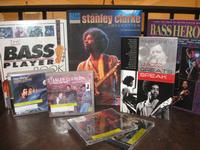 Just a few of our favorites
Add a Comment