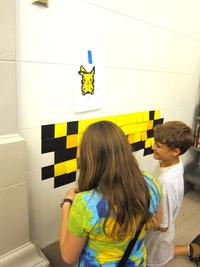 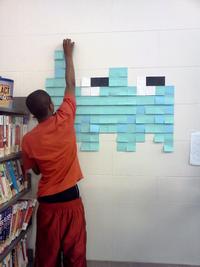 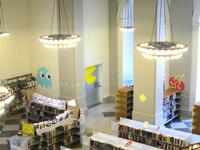 The teens began the process by discussing favorite old arcade and early Nintendo characters that were created in the age of pixel animation. Some ideas were Mario, Mega Man, Donkey Kong, and Pac-Man. They used graph paper and highlighters to map out the characters, and created schematics using 1-inch squares of construction paper and painter’s tape. They employed some simple math skills to determine how large of a space we would need for the 3 x 3 traditional post-it size (they had to scale down many of their original, more ambitious ideas; all teens agreed that Ben Franklin in post-it form ended up looking like a “terrifying clown”). The most difficult part of the process: finding black post-its.

See the Pac-Man and Pikachu post-it murals in Philbrick Hall at the Parkway Central Library from now until the end of July. The Philbrick teen tumblr blog can be visited at http://freelibraryteencenter.tumblr.com/

2 Comments | Add a Comment
fantastic post, very informative. I wonder why the other experts of this sector don't notice this. You should continue your writing. I'm confident, you've a great readers' base already!
childrens murals - canada
Good scan, good points, a number of which I have learned along the manner additionally (humility, grace, layoff the controversial stuff). Can share with my colleagues at work as we begin blogging from a company perspective.
painted murals - canada