Today marks what would have been the 84th birthday of Nobel Prize winning activist and Civil Rights Leader Dr.Martin Luther King, Jr.

The DREAM@50 is a tribute series that was held throughout 2012 and continues into 2013, commemorating the 50th anniversary of Martin Luther King, Jr.'s "I Have a Dream" speech. The series included a student art contest (K-12), a world music/dance festival, and  video PSAs, all in celebration of creative collaboration in both the Civil Rights Movement and the arts as the foundation for a new paradigm in how we can live together. Philadelphia was one of 10 U.S. cities chosen to participate in the contest.

Students involved in the Free Library's Literacy Enrichment After-school Program (LEAP) who submitted art  to the contest currently have their art on display in Parkway Central Library.

The Free Library LEAP DREAM@50 contest winners can be seen on the right.

Those winners have been submitted to the Philadelphia-wide DREAM@50 art contest which will be judged with the results being announced at an awards ceremony on February 20th at Philadelphia Museum of Art.

Good luck to the artists and their entries! 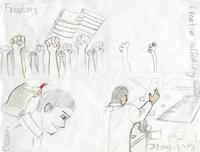 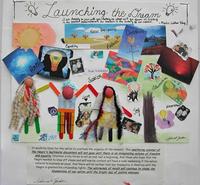 High School Winner – “Launching the Dream” by Asherah G., 11th grade, Wynnefield Branch Library LEAP program
3 Comments | Add a Comment
What a great man, inspiring generations long after he passed away, may his soul RIP. I have often thought about him and his speech, sometimes when I feel down, or when I get angry with others, I look down deep in my heart and I remember that we are all human, that we all deserve respect, and that religious, political differences should bring us together rather than drive us apart. What a great man, a visionary, may God bless his soul, and bless us all!
AmandaKarma - Philadelphia
What a great opportunity for the students to learn about Martin Luther King, Jr. through Arts and Creativity. Congratulations to all the winners!
Abstract Art Artist - www.carmenguedez.com
Good congratulations to all winners. I remember his words that Faith is taking the first step even when you don't see the whole staircase.
Dannie Addison - http://www.superdrugsaver.com