Elmore Leonard Writing at His Desk 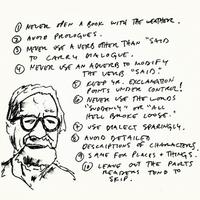 Criminally talented and prolific novelist and screenwriter Elmore Leonard passed away earlier this week at the age of 87 from complications suffered after a stroke in July.

To say that the man had a way with words would be a gross understatement. He was a master of razor sharp dialogue and real-yet-bigger-than-life characters who were strong-willed yet always flawed in some way. You know, regular people. He never overwrote; the opening line of every story set the tone from the minute you opened the book and put eyeball to the page, always getting right to the action instead of getting bogged down in flowery prose or overwrought descriptions with unimportant details. British novelist Martin Amis said about Leonard's writing style, "Your prose makes Raymond Chandler look clumsy."

"Dutch", as he often preferred to be called, started his career by writing westerns. It was a huge market with great demand for short stories and dime store pulp novels, so he could learn and grow as a writer and still be able to make some scratch along the way. The stories are mostly set in the 1880s of Arizona and Texas, with a heavy Spanish influence, standoffs and shootouts between Apache Indians and the U.S. cavalry, and the dusty and dangerous life of The Wild West. Not bad for a boy from Detroit.

He found greater success and excess in crime fiction and suspense thrillers starting in the late 1960s through the 1970s. With novels such as The Big Bounce, Mr. Majestyk, 52 Pick-Up, Unknown Man No. 89, and The Switch, Leonard created an otherworld based in and around Detroit, overun with wisecracking mobsters, fast cars, scheming conmen, independent women, hopeful hoodlums, and conflicted killers. All cool, all confident, all characters with actual character.

He may have been tagged with the moniker of a "genre writer", but he transcended and obliterated that tag with every pen stroke. Yes, he wrote every draft by hand on yellow legal notepads.

It didn't take long for Hollywood to come knocking on Dutch's door. More than half of the 45 novels he wrote have been adapted for both the big and small screen. Sometimes they would even call on him to write the screenplay himself.

But enough eulogizing, Elmore Leonard's words speak for themselves. I'd wager "Dutch" would've wanted it that way anyway, and I'm sure that I've probably already broken enough of his "Rules for Writing" in this blog post.


Here's a Friday Five of books and movies by Elmore Leonard available from our collections.

You can browse our online catalog for more than 150 titles about or by Elmore Leonard as well. Although, that prospect may be an addictive one, as the re-readable and re-watchable meter of Elmore Leonard's works are through the roof, so be forewarned...