The doorbell rings. I walk through the hallway to answer it. Although I’ve done this walk repeatedly over the years, this time something is different. This one book catches the corner of my eye. It is shelved vertically behind the glass cabinet doors of a wooden bookcase that houses our Horace Collection. It bears a familiar monogram on its spine. I’ll need to take a closer look. I unlock the door, greet the patron, lock the door, retrieve the book, set a cradle for it and look it over--finally. My suspicions are confirmed.  This simple yet elegant book once belonged to one of the most important private libraries in the world of the 16th century. It’s a book from the library of Jacques-Auguste de Thou (1553—1617).

I had recently learned about de Thou and his famous library in a class I took at Rare Book School on the History of Bindings, taught by Professor Jan Storm van Leeuwen.  In fact, I was surprised to find that, not too long ago as noted in his recent blog post, another student of his from Harvard University had also identified a de Thou book in his collection after having taken the same class.  De Thou was an important French historian, a Latinist, statesman, and Director of the Royal Library (1593). In 1595 he became president of the Paris parlement and used his position to negotiate the Edict of Nantes (1598) which granted rights to the French Protestants (Huguenots). De Thou, although a Catholic, believed that the French Church should be free of Papal control. He also argued that Catholics were partly responsible for the religious wars against the Protestants. Because his views were critical of the Catholic Church and government, Marie de Medici, the Queen Regent, denied him the highest appointed position of the parliament as Premier (first) president of  the parlement. His major work, Historiae Sui Temporis (1610), a four volume work, written in Latin to underscore his unbiased and scientific approach,  chronicled the events of his time. The second volume of the book addressed the French wars of Religion (1560-1572) and was listed on the church’s index of prohibited books (Index librorum prohibitorum).

In 1583, de Thou inherited the stately library from his father, Christophe de Thou, who was the first President of the Parliament of Paris and friend of Jean Grolier ( 1479-1565).. He continued to enrich the library, which he opened to students and bibliophiles. By 1679, the library contained 1,000 ms. and 8000 printed books.

What makes de Thou books unique is that it is possible to track their provenance  and determine when they were bound to within specific date ranges, based on the stamped, interlaced initials or monograms found on the spines and covers (along with the coat of arms used). These initials (and arms) change over time and correspond to defined periods in de Thou’s personal life as he continued to enrich his library.  The periods include:  his bachelor days (c.1572—1587) as identified by the initials “A.D.T.” for Auguste de Thou; the period in which he was married to his first wife, Marie Barbançon (c.1587—1603) now identified by the initials “J.A.” and  ” M” for Marie, his wife; and the period  after the death of his first wife (1603—)., when he marries his second wife, Gasparde de la Chastre. Here the initial “M” for Marie, his deceased wife, is replaced with the letter “G” for Gasparde, so the initials read “I.A.G.” or “I.A.G.G.”

Our de Thou book is a Horace Opera, printed at Basle by Henricus Petri in 1555. Gilt on both covers are de Thou’s arms with those of his first wife, Marie. De Thou’s monogram (“I..A ”for Jacques Auguste interlaced with the initial “M” for his first wife, Marie) is repeated in six panels on the spine. As result, we know it was bound between 1587 and 1603.  An interesting blog for a similar binding of a book in UPENN’s  Rare Book and Manuscript Library collection was published last year. 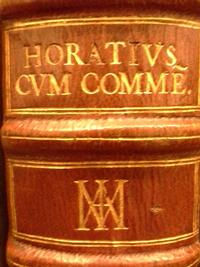 Spine compartment, displaying gilt, interlaced initials (I.A.M) for Jacques Auguste first wife, Marie (Barbançon).
Upper Cover displaying the gilt arms of de Thou and his wife, Marie, including their interlaced initials.
2 Comments | Add a Comment
Wow! Very cool. What would the monetary value be on a book like that?
Juanita - Philadelphia
Unfortunately the books in our Horace collection have not been appraised on an item level, and as a librarian I am not qualified to appraise books. But I'm glad you enjoyed reading the blog, Juanita.
Joseph Shemtov - Philadelphia