Friday Five: A to Z X-Men

It's Memorial Day weekend once again, the official start of summer, and with it movie blockbuster season.

Godzilla may have stomped and crushed the competition last week (pun intended!), but this weekend one of the more anticipated films of the year will fill multiplexes with mutants.

X-Men Days Of Future Past is probably one of my favorite X-Men storylines: it's set in a dystopian future, has a cavalcade of costumed characters from across the Marvel universe, cool robots, and lots of mind-bending time travel!

Created by legendary X-Men writer/artist team of Chris Claremont, John Byrne, and Terry Austin, Days of Future Past has the X-Men trying to stop the Brotherhood of Evil Mutants (led by Mystique) from killing anti-mutant political figure Senator Robert Kelly. This pivotal event creates a separate timeline in which the X-Men fail to stop the political assassination, and as a result, mutant-kind is hunted, imprisoned, and exterminated by robots called Sentinels. Kitty Pride travels back in time to warn the present day X-Men, who ultimately stop the assassination (though the two timelines both remain in existence).

Sound confusing? No worries, here's some more in-depth X-history to help keep track of all of those alternate X-realities.

This newest X-movie will attempt to tie together all of the previous films and their respective casts (and we can only hope they finally let Storm really kick some ass like she does in the comics!) but some things have changed from the original comic book for the film adaptation (for better or worse). With a stellar cast and over 20 fan favorite mutants featured throughout including Wolverine, Professor X, Mystique, Magneto, Bishop, Beast, Kitty Pryde, Iceman, Quicksilver, Storm, Rogue, Colossus, Blink, Sunspot, Warpath, Havok, Toad, Link, Cyclops, Jean Grey, and the creator of the iconic Sentinels, Dr. Bolivar Trask (played in the movie by Peter Dinklage!), I can only hope this film will be epic and not a bloated mess (I'm looking at you X-Men: The Last Stand!) For a look at all of the mutants in the movie, check out all Empire magazine's X-Men cast covers.

Now, to get ready for Days of Future Past, let's take a look back through the past X-Men films in this week's "Friday Five".*

Browse the search topic "X-Men" in our online catalog for more mutant-powered graphic novels, cartoons, and movies from our collections! 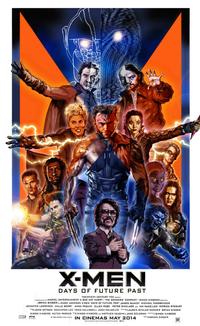 X-Men Days of Future Past cast 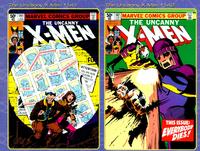 Covers to Uncanny X-Men #141 and #142, the issues that make up the bulk of Days of Future Past storyline
3 Comments | Add a Comment
Really very good collections and topics..nice job done. http://cacherealestate.com/apartments-for-rent-in-logan-utah/
alex - logan
Nice movie
Ravinder Godara - Hisar
This article is really awesome. It enjoys me very much. The content are so much informative.Thank you writer for giving me such a good article.
James Demon