Check Us Out: Meet Andy

Perhaps one of the Free Library's most popular and beloved public programs, the Author Events Series fosters great conversations with thoughtful readers and the world's leading writers and thinkers. In this edition of "Check Us Out," take a minute to get to know Andy Kahan, the Ruth and A. Morris Williams Director of this award-winning series.

How have libraries shaped your life?
In a practical and very important way, the Central Library of the Free Library of Philadelphia has shaped my life more than any other by affording me the wherewithal to buy a house, raise a family, and put my kids through school. I remember some years back when I was a bike messenger and I had to make a delivery to an office here. I was wandering around the ground floor poking my head into various rooms—don’t tell security—when I saw a placard for the Collection Development Department and thought: I’d like that job! Six years passed, and while I didn’t get that job, it turns out Collection Development acquires the latest book by each author we have for the series. In the end, I had my wish after all. I also love to disappear into the stacks to read during lunch—or used to before we moved the books off-site to make room for more public spaces. The stacks were so substantial: wood pulp, ink, metal, and stone. There’s great consolation in those material verities and the ideas they contain. Also, one hears the strangest things in the stacks: people talking to themselves, snoring, singing, cursing, yelling (at themselves and others)—that sort of thing. But the best part: In the stacks, no one can hear you read.

What do you enjoy most about being the Ruth W. and A. Morris Williams, Jr. Director of Author Events?
Aside from the fact that I have a title, which seems unbelievable to me, particularly since the only titles I expected were “Hey,” “Mister,” or "Hey Mister!," I think I most enjoy booking the authors. Whenever I confirm a writer with a terrific new work, regardless of topic or genre, it’s tantamount to the thrill of bagging big game without the bloodletting (though I don’t speak from actual hunting experience unless shooting a squirrel with a BB gun as a kid counts. And yes, the squirrel lived). In this line of work, there’s no muss, no fuss, nothing to clean up after the hunt. Next!

Which author(s) have you been most excited about having as part of the Author Events Series? Why?
It’s hard to know where to begin. I was ecstatic when Chinua Achebe agreed to come (twice). So ecstatic, in fact, that when I wrote the blurb for the program I unilaterally awarded him the Nobel Prize in literature. A few days before he came I realized Soyinka had won, not Achebe, so I scrambled to have a plaque engraved naming Achebe “The Noble Prize” winner—by way of apology. When I gave him the Noble Prize, he offered me a skeptical glance and harrumphed. His son Chidi, who was standing next to him said, “Don’t worry about it. Everyone thinks he won the Nobel Prize.” At that point, Achebe broke into a smile and all was forgiven. There are so many other authors that I’ve been excited to host, most recently David Mitchell, author of Ghostwritten, Cloud Atlas, and The Thousand Autumns of Jacob De Zoet. I love reading along as his relentless imagination works the words. We’ll have him back for every book until he gives up the pen.

How do you choose which authors to bring to the Free Library? Who have you always wanted to book but haven’t been able to yet?
That’s easy. I try to bring the best writers with the biggest/most important books. Don’t ask me what best means. I don’t actually know. And I don’t always get them. For every writer who agrees to come another two say no. The shortlist of writers I’d like to host who haven’t come is pretty short because most are dead, with the exceptions of Thomas Pynchon and Cormac McCarthy who don’t do events, and Noam Chomsky, whom I’ve corresponded with over the years but can’t seem to woo back. I’d love to have had Carson McCullers, Jim Thompson, Angela Carter, and definitely Richard Brautigan—I used to read Trout Fishing in America once a year—and I’d top the list with Charles Addams.

Tell us a factoid about yourself that people might be surprised to know.
I’m a Formula 1 racing fan. I also enjoy going to the Monster Mile in Dover to watch NASCAR. Next to the births of my daughters, I’ve never experienced anything else as exciting. Prometheus may have stolen fire from the gods, but NASCAR stole thunder from heaven. 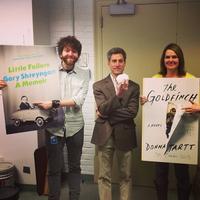