August 15th marks the 75th anniversary of the Hollywood premiere of The Wizard of Oz at the famous Grauman's Chinese Theatre. To say that the story, both the original L. Frank Baum novel and the adapted 1939 film, is ingrained in pop culture would an understatement.

Since its publication in 1900, The Wizard of Oz has been adapted into every conceivable form of media:  the 19 sequels and universe created and written by Baum himself, the popular Wicked series of books, graphic novels, audio books, art books, adaptions for the stage, and musical renditions, to name just a few. Then there are the films inspired by the original Technicolor fantasy dream like the funky trip down the yellow brick road that is The Whiz, the sci-fi mindwarp of Zardoz, the recent Sam Raimi directed prequel Oz The Great and Powerful, and even The Muppets have visited the world of Oz. You can also find tons of parallels to Oz in the television show Lost and even in Star Wars.

Whether you were introduced to the characters of Dorthy, Toto, The Scarecrow, The Tin Man, The Cowardly Lion, The Wicked Witch of the West, or Professor Marvel through the film version, the book, or even a school play, the story itself and the fantastical world it creates is what has captivated the minds and hearts of young and old alike for generations.

I can definitely remember the first time I saw the film: I was 5 years old and I watched it on television. It was big deal too, because I got to stay up late while my younger brother had to go to bed (ha!). Being a child of the 1970s and 1980s, before having a VHS videotape player (and obviously waaaaaay before the Internet and streaming video), seeing something like The Wizard of Oz on television was a big event, as it was only broadcast once a year! Anyway, I was totally fascinated by the vivid colors and characters, and maybe even a little scared at certain parts (hello creepy talking trees and evil flying monkeys!) Afterwards, I wanted to know more, so we went to the library and took out the book. Then once my parents read that to me, we went back and got all the sequels and by that point I was able to read them by myself.

I recently got to relive that first amazed wonderment through my son's own eyes when he watched the film for the first time. Like father like son, after he watched the film, he wanted to read the book, so we have been reading a chapter every night before bed. And even though we aren't finished yet, he wants to know what happens next to Dorothy and all the other characters.

It's books and films like The Wizard of Oz that really foster a love of reading, spark creativity, and inspire curiosity for a lifetime.

Here are some more Wizard of Oz odds and ends to further explore:


You can search for all things Oz in our online catalog, which in and of itself is a gateway to all kinds of fantastical universes and worlds of literature, film, and art!

What are some of your favorite fantasy films similar to The Wizard of Oz? Let us know in the comments! 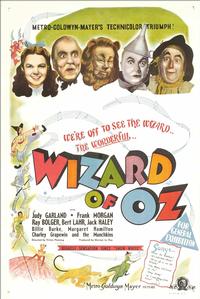 The Wizard of Oz 1939 movie poster 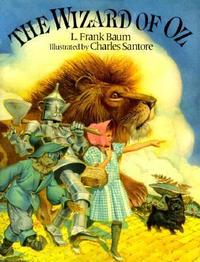 The Wizard of Oz by L. Frank Baum with illustrations by Charles Santore
Add a Comment