Friday Five: Gone Girl and Making the Leap from Page to Screen

The crisp autumn air has blown away any cinematic stink from a fairly lackluster summer at the box office. In the remaining few months of the year, cineplexes will screen more than their fair share of film adaptations of beloved and bestselling books. Already throughout this year, YA-centric success stories have included The Maze Runner, The Fault in Our Stars, and Divergent, all moderate to large successes with loyal YA-reading audiences and moviegoers.

Probably the biggest and most anticipated film adaptation of the year besides the next installment of The Hunger Games (but we'll get to that in a little bit...) is the David Fincher directed and Ben Affleck starring Gone Girl.

I've got to be honest though, I personally thought this book was awful and can't see the movie being much better. I am a fan of David Fincher's work and his recent collaborations with Trent Reznor have breathed some new sounds into the lost art of film scores, but the one-dimensional characters in this story are abhorrent and I don't feel sympathy for them or their predicaments at all. The whole thing is sensationalistic Lifetime Movie of the Week material at best.

The American public seem to love this book though, as Gone Girl was #1 on the New York Times fiction bestseller list for eight weeks when it was released in 2012 and also spent twenty-six weeks on National Public Radio's hardcover fiction bestseller list. The book has since gone on to sell over six million copies in print and digital editions according to the book's publisher, and has been a constant top searched and checked out title here at Free Library.

As is always on the minds of readers whose beloved books are adapted into movies, how faithful is the film to the novel?
Note: don't click on the link if you don't want to be spoiled!

But whether or not Gone Girl is a box office bonanza or a bloated bomb, Hollywood has no shortage of books they are planning on adapting for the screen. Here's a "Friday Five" of upcoming stories making the leap from the page to the screen this year:

What books being adapted for the screen are you looking forward to seeing in the future? What are some books you would like to see make the leap from the page to the silver screen and which ones are you praying never get adapted so as not to ruin the original reading experience? Leave a comment and let us know! 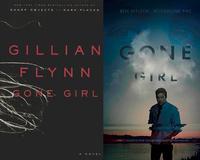 Gone Girl makes leap from page to screen
1 Comment | Add a Comment
Nice blog post. I haven't read "Gone Girl" but was looking forward to the film and I have to say I was not disappointed. Gone Girl is the most entertaining film I've seen all year! I highly recommend it for everyone. I'm pretty sure there will be awards for David Fincher, Ben Affleck and Rosamund Pike this award season.
Camille T