Streaming Screams and Scares on Hoopla this Halloween

Watching scary movies during the month of October is a tradition almost as ancient as the Halloween holiday itself. You can't surf around the television dial without seeing any number of ghosts, zombies, slashers, monsters, and mayhem emanating from your screen. Some channels even have dedicated horror movie marathons like AMC's long running Fearfest, full of classic horror movie series, or ABC Family's 13 Nights of Halloween, that caters to kid-friendly frights. In the Philadelphia area, real horror hounds and macabre movie goers are spoiled by Exhumed Films annual horrorthon programming, showing some of the rarest and scariest films ever printed to celluloid.

But what if you aren't lucky enough to snag a ticket to an event like Exhumed or dedicate a whole night to a scary series of movies that will only be on at a specific time (or sadly like myself, fall asleep only to miss what you were trying to stay up for)?!

Just get out your library card and stream some scares and screams with Hoopla!

Hoopla has a really great and eclectic selection of movies, full of classics, cult favorites, and newer genre movies as well.

Quickly browsing through Hoopla it didn't take me long to find one of my favorite horror anthology movies, the 1972 Amicus Productions' presentation of Tales From The Crypt. I'm definitely going to add this one to my Favorites list to watch later. 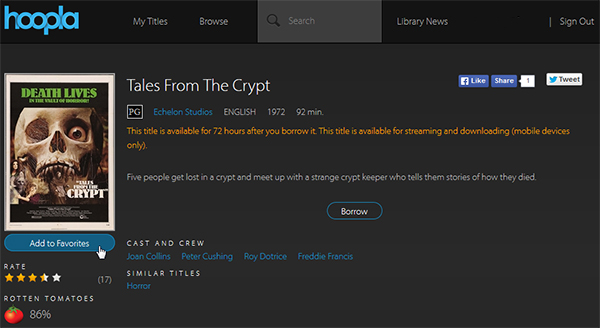 Another movie that came up in my initial search was Phantasm II, a rare sequel to a classic horror movie that is just as good as the original (in my humble horror-minded opinion). 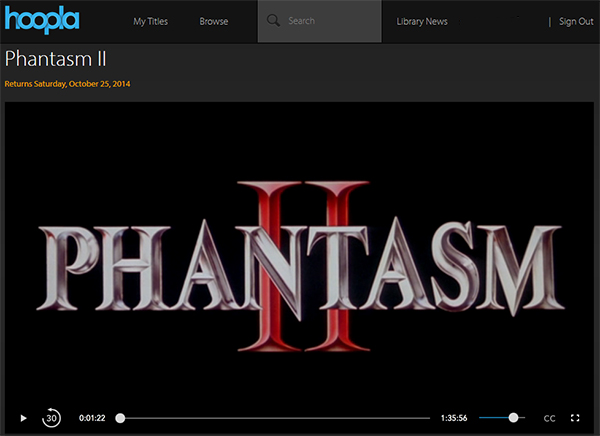 Some other creepy classics and cult favorites currently available on Hoopla include George A. Romero's original 1968 zombie masterpiece, Night of the Living Dead; John Carpenter's modern day parable on the horrors of consumerism; They Live; Sam Raimi's low budget yet legendary debut fright fest The Evil Dead; James Gunn's slimy practical effects monster movie throwback, Slither; the black and white Gothic greatness of Bride of Frankenstein; and one of Wes Craven's more obscure and perhaps misunderstood films The People Under The Stairs.

There's plenty of children's Halloween themed videos to choose from as well like Is There A Monster In My Closet?, The Dog Who Saved Halloween, By The Light of the Halloween Moon, and the cartoon classic Casper the Friendly Ghost. 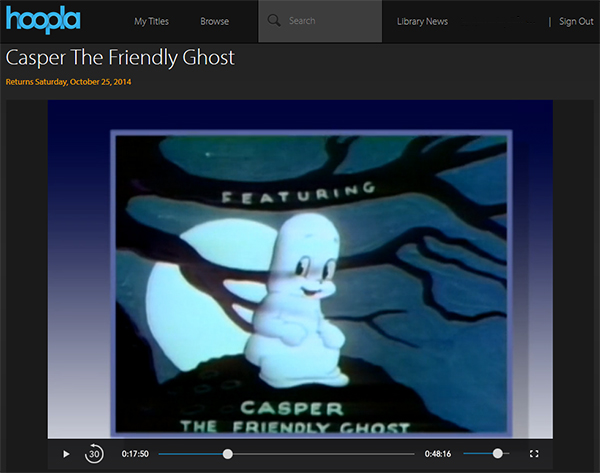 Want some laughs served up with your scares? Look no further than the archetype for all funny and scary movies to come, Abbott and Costello Meet Frankenstein. Also available on Hoopla is the great documentary about the hilariously bad Troll 2, which has been touted as the "best worst movie ever" (although I still think that crown belongs to Plan 9 From Outer Space). And while we're yucking it up, why not throw in a Mystery Science Theater 3000 film for the ultimate in absurdity: The Final Sacrifice, the story of a Candian cult lead by an evil warlock who is hellbent on world domination, is one of the better later-era MST3K episodes (again, in my humble talking-back-to-the-screen-and-making-fun-of-the-silly-sci-fi-horror-movie opinion). 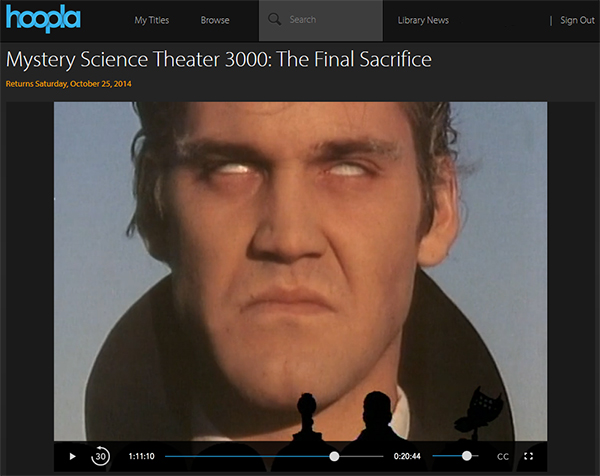 There are some movies available on Hoopla that I don't even know how to classify except that they are down right weird, which can be gathered alone with titles like Night of the Dribbler, Rubber, and Strippers vs. Werewolves. Even weirder than those movies is projectionist Mad Ron, along with a ventriloquist and his zombie puppet, who showcases some truly terrifying trailers in the previously-only-available-on-VHS Mad Ron's Prevues From Hell.

Browse through Hoopla's library of Horror and Sci-Fi movies now and create your own scare-a-thon for this Halloween season!