illustrator and author Matt Phelan from Ardmore, PA! The award was presented this month at the annual Pennsylvania Library Association Annual Conference.

Matt is an illustrator and author of many books for young readers, including the award-winning and nominated graphic novels The Storm in the Barn (2010 Scott O'Dell Award for Historical Fiction), Around the World (2012 Carolyn W. Field Award from the Pennsylvania Library Association, as well as two Eisner Award nominations), and Bluffton (nominated this year for three Eisner Awards including Best Graphic Album). His first picture book, Druthers, was released in September of this year.

Established in 1963, the Free Library of Philadelphia/Drexel University Children’s Literature Citation is awarded to authors, illustrators, publishers, and others who have made outstanding contributions to the field of children’s literature. The recipient must hail from Philadelphia or have contributed significantly to literature for children in the Philadelphia area. Past recipients have included authors Jan & Stan Berenstain (1982), illustrator Maurice Sendak (1989), and publisher J.B. Lippincott Co. (1975), to name just a few. 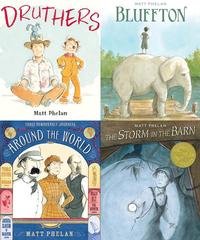