The 65th National Book Awards took place on November 19th and featured appearances by Fran Lebowitz, Steve Martin, Rudine Sims Bishop, Garrison Keillor, and many other distinctive voices of American literature who have previously served as Masters of Ceremony at the awards. Not a stuffy awards show by any means, this year featured some groundbreaking book and author selections, a genre defying literary legend honored, and also some really stupid and insensitive comments made by the host of the event (more on that later).

This year's winners include...

Even with the great selections of this year's winners, it was a specific science fiction writer that really stole the show. Ursula K. Le Guin, the author of such classics as The Left Hand of Darkness and the Earthsea novels, received a standing ovation when she came on stage to accept the Medal for Distinguished Contribution to American Letters. Introduced by gushing fanboy Neil Gaiman, Le Guin gave a rousing speech about art and commerce, referencing the recent dispute between Amazon and Hachette over e-book pricing.

A couple choice quotes from her speech:

"The power of capitalism can seem inescapable, but resistance and change begin in art."
"The name of our beautiful reward is not profit. Its name is freedom."

You can see her speech in it's entirety in the following video.

Finally, it can't be glossed over how awful, insensitive, and just plain inappropriate host Daniel Handler's (a.k.a Lemony Snicket) "jokes" were towards winning author Jacqueline Woodson. Suffice to say, he did apologize and cop to his racist comments, going so far as to take to Twitter to announce he was donating $10,000 to the Indigogo campaign for We Need Diverse Books and urged his followers that he would match all contributions made to the organization up to $100,000. So, here's to turning a negative into a positive for once.

You can find all of this year's National Book Award nominees and winners in our catalog. Happy reading! 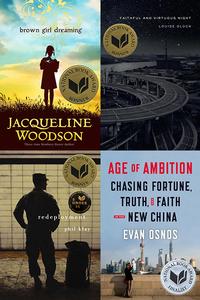