Free Library resources for term papers exploring the roots of the rage at the death of Michael Brown in Ferguson, Missouri. Part 1: an Introduction and Background

[Editorial Note: This is the first of a six part series intended to demonstrate for teachers and students the use of special Free Library of Philadelphia resources for conducting research into issues raised by events in Ferguson, MO during the last 4 months of 2014. The series covers gathering background information, finding and acquiring books, finding and acquiring periodical literature, accessing newspaper records, utilizing primary sources, and finally adding interesting data and other materials in an appendix or elsewhere within the text of a paper.]

Introduction
Students and teachers have been flooding Free Library reference desks with questions surrounding recent events in Ferguson, Missouri. It’s inspiring to hear their pointed and probing questions about the society that allows systemic tragedies and historical heartbreaks to converge in such a terrible way in suburban St. Louis. We are certain some of the credit for such academic interest rests with organizations such as Teaching for Change, which quickly assembled a digital lesson plan as early as August 2014. New media outlets such as The Root added further guidance for educators. We should not forget that the youth themselves are keenly following breaking news through social media. Hashtags such as #BlackLivesMatter on Twitter are crucial pieces to the information seeking behavior of our fellow citizens who are critically engaging with the news:

As librarians, we anticipate many teachers and students will want to go beyond classroom and virtual discussions to focus student research and writing projects on the issues raised by the killing of Michael Brown. To illuminate the wealth of resources available through the Free Library of Philadelphia, we’d like to walk readers through each kind of resource. Lifelong learners and other curious people living and working outside the school system too can benefit from exploring these resources. We hope that regardless of where you are in your life as a learner, you’ll be curious to explore the tools we offer in the interest of building an informed citizenry.

Background
Any research project would benefit from starting with a good encyclopedia. Fortunately, the Free Library offers a wonderful collection of electronic encyclopedias from the Gale Virtual Reference Library.

Searching for “Police Brutality” in GVRL yields 536 articles from at least 50 discipline specific encyclopedias representing fields as diverse as criminal justice, sociology, history, geography, queer studies, sex and gender, labor studies, cultural studies and more. One fine example comes from Encyclopedia of African American Society where the author traces police brutality in America to the maintenance of the institution of slavery that built this country and its wealth:

During the period of slavery, criminal laws were designed to protect the safety and property of white citizens, who lived in constant fear of slave insurrections. The violence inherent to slavery even affected the treatment of free blacks because the logic of the system of race-based slavery demanded black subordination to whites.

It’s in this same book and via this same electronic resource that you can read Heather Mac Donald’s counterpoint essay "The Police Are Not Racist". Mac Donald does offer an interesting critical perspective [emphases mine] to complicate skepticism about the righteousness of policing:

It is [Police Officers'] emotional relation to the good people of the community that makes policing such an imperative for these cops. Many come from God-fearing, law-abiding homes where respect for authority was absolute. These officers have seen firsthand the damage done by thugs, and they are determined to stop it. "I will never retreat," vows McLaughlin. "We are the last line of defense against mayhem."

Amid all the anti-cop taunting they hear, they remind themselves, in the words of Officer David Brown, that crime victims "regard you as heroes."

If the law-abiding black poor and middle class are no abstractions for these cops—as they are for guilty white liberals, who condescendingly think they are benefiting black people by promoting criminal-friendly policies—neither is the depravity of young thugs some distant construct to be brushed away for the more gratifying exercise of understanding the underprivileged.

Her manichean language of mayhem and thugs versus absolute authority and law-abiding good people need not distract us from our consensus goal that we all want to live in communities of peace. As the marching chant often goes: “No justice, no peace”. Perhaps this convergence of justice and peace is the well from which we’ll draw a solution?

Finally, a note is in order for the image accompanying this post. It’s a detail from a comic strip published in the Philadelphia Evening Public Ledger in 1919 held in our digital collections. The complete original is shocking to our contemporary eyes not only for its dehumanizing representation of a black police officer, but also to a lesser extent its ethnocentric depictions of white working class police officers as a motley rabble. The comic is however noteworthy because it depicts a moment in time when the Philadelphia gentry could imagine brutality or at least intimidation at the hands of a diverse police force. We’ll discuss student use of primary documents like this more in a future post.

Up next: gathering books... 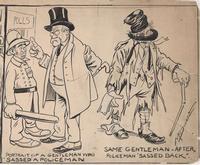 McDougall, Walt.
1 Comment | Add a Comment
This is such a wonderful resource. Thank you!!
Kate Derickson - Minneapolis