Free Library resources for term papers exploring the roots of the rage at the death of Michael Brown in Ferguson, Missouri. Part 3: Journal Resources

[Editorial Note: This is the third of a six part series intended to demonstrate for teachers and students the use of special Free Library of Philadelphia resources for conducting research into issues raised by events in Ferguson, MO during the last 4 months of 2014. The series covers gathering background information, finding and acquiring books, finding and acquiring periodical literature, accessing the newspaper record, utilizing primary sources, and finally adding interesting data and other materials in an appendix or elsewhere within the text of a paper.]

Before scholars like Michelle Alexander--mentioned in our last post--get a book to press, they typically share shorter research articles in magazines written and edited by professors and other experts. Typically we call these publications “journals”. When writers of research papers read the journal literature and discusses what they find in their own writing, they too have entered the world of scholarship. In many ways, the research paper is training to become an equal peer with scholars around the world. Anyone who masters the skills outlined in this guide could get published in “peer review” journals, which almost always choose articles blind to the author’s identity.

The Free Library’s Parkway Central Library subscribes to thousands of these journals in paper form, but fortunately we also subscribe to full-text databases of electronic versions as well. This makes it a little easier to find relevant articles quickly. JSTOR is perhaps our most serious non-profit provider of current and back issues of important scholarly journals. As of writing, the phrase “police brutality” occurs in 15,605 articles across well over 300 serious academic journals. The possibilities for the study of this problem are as nearly endless as the diversity of scholarly voices weighing in on the topic.

EBSCOhost is another organization that sells us access to an extensive library of electronic journals as well as more popular magazines, newspapers, trade publications, and other sources from which experts and professionals share their discoveries. Just take a look at the distribution of perspectives on “police brutality” as represented by the number of hits in each of EBSCOhost’s specialist databases:

Or if you prefer, take a look at the distribution by type of electronic item in the various EBSCOhost databases:

To run searches like the above it’s probably easiest to find EBSCOhost’s MasterFILE Main Edition on our database page. After logging into MasterFILE, click on “choose databases” to select the mix of databases that seems right for your question. If you need help, just ask!

[Editor: Up next: Gathering newspaper articles]

*The photo accompanying this post depicts the aftermath of a three way confrontation between striking Hollywood crafts people, strike-breaking replacement workers (commonly called scabs) attempting to drive through the picket lines, and three separate Los Angeles area police forces. The strife in the streets loomed large in the political imagination in the late 1940s and may have led to the passage of the Taft-Hartley Act, which blunted an ascendant labor movement in the United States. Student researchers can ask themselves the counter-factual historical question: "If Taft-Hartley had not passed over Truman's veto, would American union members be engaged in political or sympathy strikes against police misconduct today?" The thought experiment is complex. One thing is certain over the past 60 years: the use of the automobile as a weapon against picketers has not faded from the public sphere. 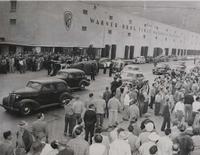