Free Library resources for term papers exploring the roots of the rage at the death of... Eric Garner in New York. Part 4: Newspaper Resources

[Editorial Note: This is the fourth of a six part series intended to demonstrate for teachers and students the use of special Free Library of Philadelphia resources for conducting research into issues raised by events in Ferguson, MO during the last 4 months of 2014. Today on the day after the failure to indict any officers of the law in the choking death of Eric Garner we've changed the title in acknowledgement of the expanding outrage. This series covers gathering background information, finding and acquiring books, finding and acquiring periodical literature, accessing the newspaper record, utilizing primary sources, and finally adding interesting data and other materials in an appendix or elsewhere within the text of a paper.]

Among scholars, historians are particularly reliant on newspapers to understand the past. In our attempt to bring the tools of historians to everybody, the Free Library subscribes to several newspaper databases. Readers can search through the Philadelphia Inquirer from 1981 and the Daily News from 1978. If one were to search for “police shooting” in both databases, one would find the following distribution of articles for each of the past 36 years:

*Search conducted on Nov 26, 2014 cannot predict shootings that will occur in the last weeks of this year.

Obviously, the researcher will need to investigate further to understand the context of each article. Some of the questions a researcher might ask are: “What patterns do I see?” “How are various parties described?” “What changes do I see over time?”

Searching for older newspaper articles between 1923 and 1978 gets more complicated. While the Free Library has complete sets of microfilm for hundreds of papers for much of the history of newspaper publishing in America, the only way to “search” microfilm if you don’t already have a date is to use an index: an annual listing of the subjects noted by an indexer of a particular newspaper or set of newspapers. Unfortunately, not every paper was indexed. For index possibilities, it’s best to get in touch with the Newspaper and Microfilm Center at the Free Library directly (215-686-5431).

Before 1923, things get easier again. The Library of Congress oversees a project to digitize newspapers around the country from roughly 1836-1922: Chronicling America: Historic American Newspapers. This project includes full text from at least two important Philadelphia newspapers:

Most researchers will find it easiest to search by state rather than browsing specific papers. The greater the distance in time, the more glaring the similarities and differences in human events tend to become when comparing the newspapers of today with those of long ago.

To go back to the beginning of newspapers in America, researchers should use the database Early American Newspapers. If researchers are creative with keywords, they will unearth a treasure trove of primary sources chronicling the use of force by police agencies over the course of American history. It’s important to know that naming conventions for identifying someone as a member of the African Diaspora have changed over time. When searching old newspapers for stories addressing the convergence of police and African Americans, consider using the names that reporters would have been likely to use before the civil rights era.

Take a look at this example from the Philadelphia Inquirer on January 9, 1830, found simply by searching the words “negro” and “police”: 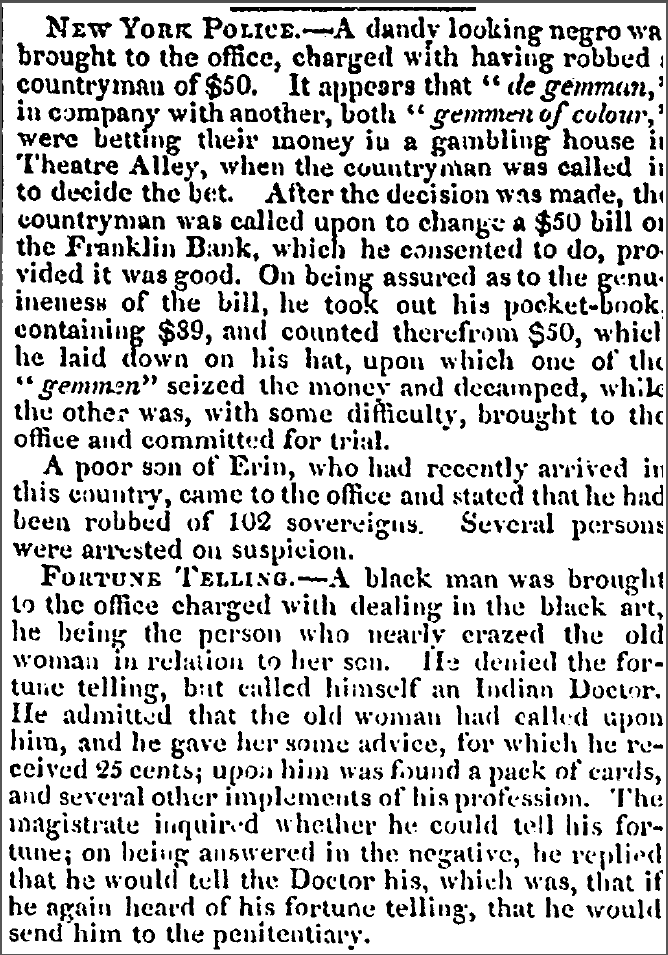 An astute reader of the above will note that the reporter writes in a more colorful tone than we’re accustomed to in today’s papers. He uses phrases such as “a poor son of Erin” to mean a person of Irish descent, and attempts to use humor throughout a column we immediately recognize as being the equivalent of today’s crime blotters.  In rendering the story of the allegations of theft among gamblers note how the writer attempts to mark the men involved as different than the readers in his use of quotations around the phrase “de gemmen”. He does this rather than simply writing: " the gentlemen" or "the gentlemen of color". Here the writer is attempting to use his own perceptions of pronunciation in Black Vernacular English to “other” the men in his story. Students writing now can explore whether such othering still occurs today, and can use the newspaper record to trace examples throughout time. Sometimes a discovery like this, will open up new possibilities of vocabulary for searching.

[Editor: Up next: working with primary resources]

*This post's photo from our Automobile Reference Collection is a staged photograph. Although it is manifestly different kind of staging than the staged photograph of a child and an officer hugging in Portland Oregon amidst the unrest radiating from Furgeson Missouri. The photo from 1947 is humorous for depicting a child in a pantomime of a stressful adult situation albeit one often mitigated by the realities exposed by #CrimingWhileWhite. The photo from 2014 depicts a truly stressed out child participating in a negotiated moment on the edge of real and unreal. The child's mother describes her son well before this moment as "...struggling with living fearlessly when it comes to the police... He wonders if someday when he no longer wears a ‘Free Hugs’ sign around his neck, when he’s a full-grown black male, if his life will be in danger for simply being" (Washington Post, Nov 29 2014). 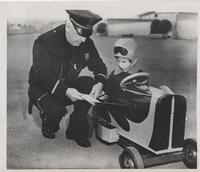