What's the first thing that pops into your mind when think about action and adventure films or television?
James Bond? Star Trek? Game of Thrones?

How about a television show that stars librarians that solve impossible mysteries, fights supernatural threats, and recovers powerful artifacts from around the world?!

The Librarians centers on an ancient organization hidden beneath the Metropolitan Public Library dedicated to protecting human kind from other worldly evil. Among the artifacts housed in the library are the Ark of the Covenant, the Spear of Destiny, the Judas Chalice, and Excalibur, to name a few. Said librarians include actors Rebecca Romijn (original movie Mystique in X-Men series), John Larroquette (80s sitcom star of Night Court), Noah Wylie (one of the doctors in long-running series ER) and guest stars Bob Newhart and Jane Curtin, both legendary comedians in their own rights.

The Librarians may seem like an unlikely premise for a show with even unlikelier heroes, but it fits right in line with the kind of Whedonesque type of television show sensibility of series like Buffy The Vampire Slayer or Firefly that have come before it. It also harkens back heavily to the serialized Indiana Jones style of grand, over the top adventure. Plus Indy was a professor and academic, which fits nicely right besides the library profession. And when you really think about it, who else would you really want protecting you in a supernatural crisis of literary proportion? Surely someone who is smart, educated, adventurous, and fearless, and that describes most librarians to a tee. 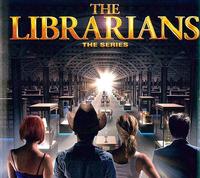