Up Next! Three Bassists + One Drummer

On Monday April 13 at 7:00 p.m., the Free Library of Philadelphia, the Producers’ Guild, and the Philadelphia Jazz Project will present the final concert of the 2014-2015 Mysterious Travelers Concert Series. The series closer, Three Bassists + One Drummer is a powerhouse supergroup working through the very low end of the sonic spectrum.

Three quarters of the quartet are veterans of the Montgomery Auditorium stage. Drummer Anwar Marshall led the recent February date. Nimrod Speaks graced Montgomery Auditorium at the Free Library with Band Burrage last April and with Vince Turnbull in November. The April 2014 also saw Brian Howell play in the Tal Shtuhl Trio, and December 2014 he returned to play with Wayne Smith, Jr. This will be Jason Fraticelli’s first appearance at the Free Library of Philadelphia. Members of this quartet as individuals have shared the stage or the classroom with a diverse array of musicians including: Jimmy Cliff, Reggie Workman, Les Claypool, Billy Martin, John Hollenbeck, Orrin Evans, Edgar Meyers, Dave Douglas, Jennifer Lopez, and Robert Glasper.

To review the lineup for the entire series, past and future, please take a look at our program guide.

To hear recordings, both live originals from Montgomery Auditorium or previously released recordings [from our streaming music services] of established jazz classics that some of these musicians are re-imagining, check out previous blog posts announcing concerts in September, October, November, December, January, February, and March.

The packed house of about 200 concert goers might not have immediately known that Karen Smith literally raced to the stage. Grace and good humor had concealed the fact until she confessed that she and one of her touring groups, Four Women Collective, had driven nearly a thousand miles to Philadelphia from Selma. Four Women Collective, named for one of Nina Simone’s must-hear masterpieces, had been there to represent her spirit during that weekend’s commemoration of events between Selma and Montgomery and across the Edmund Pettus Bridge.

Karen made pitch-perfect use of our library system’s main auditorium. She opened with what seemed to be an invocation of our shared educational mission. She brought three of her young students with “wise old souls”--as she put it--to the stage proving that this is indeed a palace of learning. After all, musicians must learn their craft, and wherever there is a community hungry to learn, a library is at the heart of that community.

When her students departed to immense applause, Karen invited her full art collective to the stage, Sistahs laying down hands, laying hands down with love. No fewer than ten performers held court throughout the night. First, Karen introduced her band and had Terri Lyons ease the audience into a new performance language.

Then, Sanovia Garrett led the group in a foot stomping and deep in the chest rendition of Nina Simone’s “Feeling Good.” Here’s Nina’s original recording from one of our streaming music databases, Jazz Music Library:

Next, poet Jewell Lloyd presented a stirring work exploring the weight of history carried on the shoulders of so many women of color.

Karen and an immensely talented dancer, Nastassja Baset, collaborated on a tribute to those who march for justice. Donna “Bring the Noise” Dorman next set that wordless musical and movement-based tribute into context with her poem reflecting on a visit with students to The National Great Blacks in Wax Museum in Baltimore.

By this point, I think it became obvious to all what a talent Nastassja Baset is not only as a dancer but also as an actor.  She took center stage for a moving monologue in the voice of Sarah Baartman. Unfortunately, we have no video capturing this powerful work. Readers looking for more background can’t go wrong by exploring our database Gale Virtual Reference Library where several encyclopedia in multiple disciplines help to decode her world historical significance. This article from the Encyclopedia of Race and Racism is particularly useful.  Perhaps comfort is not quite the right emotion, but let us at least say it is good to know that in 2002 Sarah finally returned home to a proper burial in the Gaamtoos Valley in South Africa. Our database, AP Images provides wonderful photographic context:

After an intermission we heard from poet Terri Lyons who moved the audience so close to tears that the only proper musical response had to be kicking off a final medley of songs with Bob Marley’s “No Women No Cry.”

For “Fly Me to the Moon” Karen invited to the stage from the audience several well-loved singers from Philadelphia. Ella Gahnt, Rhenda Fearrington, and V Shayne Frederick each took a glorious turn at the mic. Finally, the show ended on that perfect ironic song of hope: “Sometimes I Feel Like a Motherless Child.” The point of music, I think, is that sometimes you won’t.

April is the 8th and final concert of the series's season! 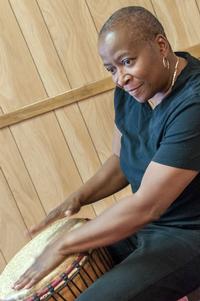 March's traveler: Karen Smith
2 Comments | Add a Comment
would love to know where Karen will be performing again
brenda - philadelphia
Hello Brenda, We'd love to have Karen Smith back on stage at the Free Library! In the meantime, it's good to know what a busy performer she is! There are many opportunities to catch her around town. Follow her groups on Facebook to stay up to date on upcoming performances. Login to Facebook and search for "Sistahs Laying down Hands" https://www.facebook.com/people/Sistahs-Laying-Down-Hands/100008382970621 or search for "For Women Collective" https://www.facebook.com/ForWomenCollectivePhilly?fref=nf Thanks for coming to concerts at the Free Library, and stay tuned for more!
Adam F - Central Library - Music Department