Borrow a Banned Book Today: The Librarian of Basra

A small group of parents in Florida are threatening to ban a children’s book close to our hearts. The book in question? The Librarian of Basra by Jeanette Winter. This librarian remembers reading it aloud to day care centers and after school groups back when he worked as a Children’s Librarian.  It’s the true story of Alia Muhammad Baker, a librarian in Basra in Iraq who risked her life to shelter and shuttle books in her library during the Iraq War.

The American Library Association named it a Noble Children’s book in 2006, and this library system handpicked it as part of 2014’s One Book, One Philadelphia program for the whole city to read... so you can imagine it’s a great book for parents and caregivers to read to kids, or for young children to read themselves.

The accusing party takes offense against the book’s mention of ”praying to a non-Christian God” as well as a claim that children should be shielded from the knowledge of war and violence.

Frankly, we think this is a bit silly. In the book, the occupying forces in the Iraq war—the U.S and British troops—aren’t even mentioned! (As a side note, the book's lack of discussing actual war circumstances and what we did there invites parents and caregivers to answer questions posed by curious readers).

This isn’t the first time The Librarian of Basra’s been challenged.  But the accusations—parents are challenging The Librarian of Basra along with another children’s book by Jeanette Winter, Nasreen’s Secret School, also set in the Middle East—smacks of Islamophobia and racism. Here in the U.S, you don’t have to look very far for the latest instance in the news of discrimination against Muslims, and the most recent attempts to ban these books seem to represent another tidal wave in an ocean of anti-Islamic sentiment.

If you want to use the Free Library to research this pressing topic, we've got many authoritative encyclopedia, newspaper, and magazine article databases available to you for free. Use your library card number and PIN to log into Access World News, or a database including magazine articles such as Student Resources in Context. Searching “Anti Islamic Sentiment” or “Islamophobia” will turn up a wealth of articles detailing daily prejudices Muslims in America face. It’s up to us as a city to unite against this challenge. Why not stroll down to your local Free Library branch and check out a copy of The Librarian of Basra to read to your young children or after school group?

Librarians are the first line of defense against modern book burners. The Librarian of Basra gives young readers a sense of not only the daily life amidst our awful invasion of Iraq, but also the value of libraries and one librarian’s commitment to defending her community’s shared knowledge. 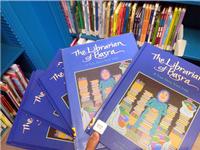 Just a few of the many copies of The Librarian of Basra we've got for you to check out
3 Comments | Add a Comment
Sad that the ignorance of some adults could deprive children of what sounds like a wonderful story (not only for its entertainment value, but for its ability to teach children about different cultures and what others have to go through to have what many here in the U.S. take for granted). Kudos to the author for sharing such a story with children's groups in the past. Perhaps if the offended parents in Florida actually picked up a book or two in their lives, they wouldn't be so closed minded.
Bob - Philadelphia
I fail to see why some parent are challenging the contents of the book "The Librarian of Basra". Do they have anything against Iraq or books? The worst thing that can happen in this country intellectually is to challenge books that deal with controversial issues!
Anthony Ali - Philadelphia
Interesting book
Omar - United Arab Emirates