#OneBookWednesday: Insights from Another Text

Texts talk to each other. That was certainly the intention behind selecting companion books for this One Book, One Philadelphia, season—to begin a larger community discussion through reading texts that respond to each other, that fill in each other’s gaps and answer each other’s questions.

I am now finding that other parts of my bookshelf are joining this “conversation,” which through my reading has broadened to encompass so much more than the historical events of the Civil War. It is difficult to read this year’s One Book choices—featured selection Cold Mountain by Charles Frazier, and companion texts Twelve Years a Slave by Solomon Northup and The Civil War by Geoffrey Ward with Ric Burns and Ken Burns—without also seeing the traces and hearing the echoes today of the subjugation and division they depict. One book in particular that addresses how these echoes are heard and felt in our country today is Ta-Nehisi Coates’ Between the World and Me, which just won the National Book Award for Nonfiction.

Coates, who visited the Free Library in October as part of the Author Events Series, writes this treatise on his life as a black man in America as a letter to his son, advising him on how to make his way in a country that often seems in opposition to who he is. Stories he shares of his experiences eerily echo at times those of Solomon Northup, a free black man living in New York in the 1840s who was kidnapped into slavery and, upon regaining his freedom, wrote Twelve Years a Slave.

Near the end of his book, Coates recounts a meeting with Dr. Mabel Jones, mother of Prince Jones, who was killed by a police officer in Prince George’s County, Maryland in September 2000. Dr. Jones compares her experience losing her son to Northup’s experiences:

“’There he was,’ she said, speaking of Solomon Northup. ‘He had means. He had a family. He was living like a human being. And one racist act took him back. And the same is true of me. I spent years developing a career, acquiring assets, engaging responsibilities. And one racist act. It’s all it takes.”

Her connection is chilling. We like to believe that we, as a society, have come so far from that time. Coates also calls to account the way the history of the Civil War and its aftermath are taught:

“But American reunion was built on a comfortable narrative that made enslavement into benevolence, white knights of body snatchers, and the mass slaughter of the war into a kind of sport in which one could conclude that both sides conducted their affairs with courage, honor, and élan. This lie of the Civil War is the lie of innocence, is the Dream. Historians conjured the Dream. Hollywood fortified the Dream. The Dream was gilded by novels and adventure stories.”

He takes this point further, explaining to his son why we still have so much difficulty speaking truthfully and openly about our nation’s past:

“To acknowledge these horrors means turning away from the brightly rendered version of your country as it has always declared itself and turning toward something murkier and unknown.”

He points out that the American success story is just that—a story, and one that is purposefully crafted to achieve a given narrative:

“A society, almost necessarily, begins every success story with the chapter that most advantages itself, and in America, these precipitating chapters are almost always rendered as the singular action of exceptional individuals.”

Historians have chosen where our American story typically begins, and whose stories we usually tell. Yet Solomon Northup was not an exceptional individual; he was a typical individual for his time, whose story we have come to know because he wrote it down. Charles Frazier does not capture the stories of exceptional individuals in Cold Mountain either; he describes the lives and journeys of two people who were affected by key historical events. And those are the stories we want to embrace this One Book season—how the Civil War affected ‘regular’ people then, and how it continues to affect us today.

Now that I have been steeped in One Book reading, I find connections to it both in my other reading choices and in current events constantly. Once we are listening, once our ears are attuned to a different frequency, once our eyes are open to the threads of history—we will find that we will hear the echoes and see the traces of the Civil War era all too frequently in our modern world. 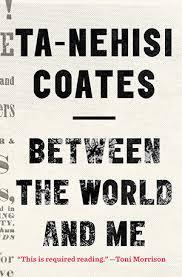 Ta-Nehisi Coates' new book Between the World and Me offers insights for our One Book season.
Add a Comment