Yes, I Do Know How to Find Great New Music

My dad was a radio DJ when I was a kid and thereby instilled in me a fierce love of music. As far back as my days of wearing footie pajamas I preferred partaking of his vast vinyl collection to playing with my own toys. When I was in college, my 1980 Toyota Corolla had a state-of-the-art Alpine stereo system (and a terrifyingly loud aftermarket alarm) that was worth more than twice the value of the car. I spent virtually all of my hard-earned fun money on records, tapes, and concerts, and I grew up to become a music librarian in a city that has a genre of soul music named after it. In my veins runs the blood of a true audiophile.

Needless to say, I'm a woman who has never needed the art of new music discovery mansplained to her.

So here are a few of my all-time favorite—and completely free—resources for finding new music.

Hype Machine
“Bottled in 2005, aged 11 years,” Hype Machine is an independent company based in Brooklyn whose focus is on “making the most culturally rich music discovery experience on the web” by keeping track of what music bloggers write about. They describe the Why of their mission as follows: “We are creating tools that empower independent voices that write about music. We think a select group of passionate people can produce more engaging conversation than a huge social mob, or a rigid hierarchy of editors. We amplify their posts and the audio they choose, to help this vibrant culture spread.” The homepage cuts right to the chase, showing the Latest Blogged Music; tabs let you narrow your search down to Freshest, Only Remixes, or No Remixes; and the Genre pull-down at the top lets you drill down further. The site also includes a social-networking component so you can make friends with like-minded music lovers.

I discovered Salt Cathedral on Hype Machine a few weeks ago, and this Brooklyn via Bogotá duo’s extraordinary song "No Ordinary Man" has been in heavy rotation on my daily playlist ever since. Oh, and if their video for "Holy Soul" fails to move you, please consider visiting a cardiologist.

SomaFM
A listener-supported, commercial-free, internet-only radio station from San Francisco, SomaFM’s mission is “to search out and expose great new music to people who otherwise may never encounter it.” And encounter it you will, because there really is something here for everyone on these lovingly curated playlists with names like Indie Pop Rocks, Underground 80s, Folk Forward, Groove Salad, Drone Zone, Cliqhop, Secret Agent, Suburbs of Goa, Illinois Street Lounge, and Seven Inch Soul.

It was on SomaFM's Lush playlist that I first heard the classically trained voice of London Grammar’s Hannah Reid sing "Stay Awake." I immediately stopped what I was doing and purchased their debut album If You Wait. I was not disappointed. Not. At. All. Check out their stunning live performance at Seattle's KEXP studio in November 2013.

Délicieuse Musique: Jukebox
Délicieuse Musique is an eclectic music blog based in Le Bouscat, France. If you don’t read French this may limit your enjoyment of the narrative portion of the site, for although there is an option to view the site in English, the articles and interviews are primarily in French. However, its Jukebox speaks the universal language of great music. There is no particular genre focus; it shares brand-new talent alongside “old songs that you could have missed or forgotten… from our parents’ old school beats to the new and upcoming artists of our generation.” Playlists are divided by mood—Dreamy, Cool, Happy, and Excited—or you can listen to a mix of all four. And there’s also a nifty tag cloud to help you narrow things down further, with tags like Sunset, Bassline, Studying, and Hangover.

Délicieuse Musique introduced me to Parisian trio Les Fils du Calvaire with the song "Rester Avec Toi (featuring Miss Kittin)" which, according to Google’s translation of the song’s description on SoundCloud, “comes and goes wet, foggy horse neighing in the distance, this beat reptilian form is both catchy, sensual, psychedelic ...” Yup. Nailed it.

I also discovered Bob Moses on the Délicieuse Musique Jukebox and now I can’t get enough of the New York via Vancouver duo described by BBC Radio One’s Pete Tong as “one of the most exciting bands in electronic music right now” in his intro to their recent Essential Mix. Their debut LP Days Gone By has easily secured a permanent spot on my list of desert island discs.

Song Exploder
Sometimes rediscovery of cherished music is just as exciting as discovering new stuff. This experience is further enhanced when given the opportunity to peek inside the minds of artists during their creative process. This is what happened when I listened to the premier episode of Radiotopia’s Song Exploder, a podcast in which musicians take apart their songs and, piece by piece, tell the story of how they were made. In this episode, Jimmy Tamborello of the iconic indietronica duo The Postal Service breaks down "The District Sleeps Alone Tonight" and talks about his instruments, his influences, and how he accidentally made a loop out of Jenny Lewis’s backing vocals.

Launched on January 1, 2014, each episode is produced and edited by host Hrishikesh Hirway in Los Angeles and features everyone from Björk to Ghostface Killah. This is mandatory listening for all music fans.

So there you have it. My absolute favorite companions on the magical journey of feeding my soul through my ears.

Where and how do you find new music? 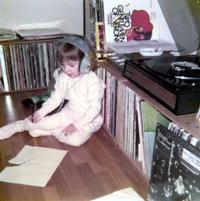